Why do design engineers for super cars and the latest Apple gadgetry get all the accolades? Perhaps it would be fairer to recognise the unsung heroes of design for the public space... those of us who create bins? (and having a super car design past, it's actually just as tricky!)

Maybe we're just biased, but it's reassuring to know that we're so detailed in our pursuit for street furniture excellence. 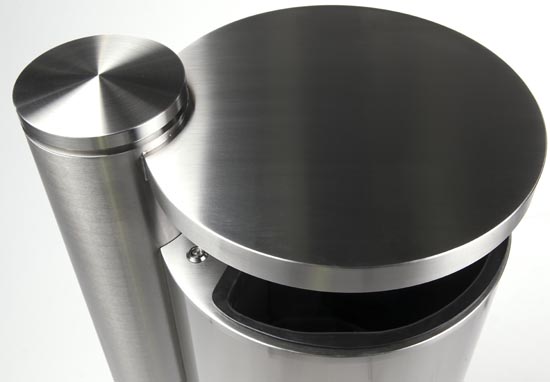 Believe it or not, a bin is a great deal more than the sum of its parts and a surprising amount of effort goes into the design of a piece of street furniture whose sole function is to hold the things we no longer want or need. There are several key design criteria to be considered and designing a bin is a delicate balancing act. 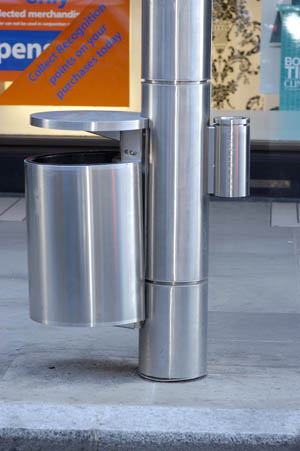 By mounting bins on lighting columns, we can avoid street clutter...

Most litter bins in the public realm are provided for general refuse: a mixture of food waste, paper, cardboard, metal cans and possibly glass. General mixed waste is not very dense, taking up a fairly large volume for its weight as it is mostly comprised of air in the empty containers. This means the ideal volume of a litter bin is between 80l and 100l. Smaller bins need emptying more regularly, considerably increasing the cost of ownership in the long term, while very large bins cause manual handling problems, possibly requiring specialist machinery to lift and empty the bin. Lifting a full liner vertically can be problematic from a manual handling point of view. A potentially heavy liner has to be lifted to a considerable height vertically and at some distance from the operator, causing excessive physical strain to the arms and upper body. The other main problem relates to hygiene: where a liner must be lifted vertically to clear the top of a bin, in doing so the operator will tend to bring the liner closer to their body. This leads to potential contamination of clothing by waste liquids, and also subjecting themselves to the aroma of the day’s (or week’s) waste. Probably not a very pleasant experience… Good design considerably simplifies the emptying of the bin and tilting bins, or bins that are designed with an angled liner, can make it easier for the operator to lift and empty. Tilting the liner during the emptying operation means the weight of the liner is partially supported by the bin itself, allowing the operator to simply tip the contents into a cart, or drag the bag out from the liner at a much lower angle. 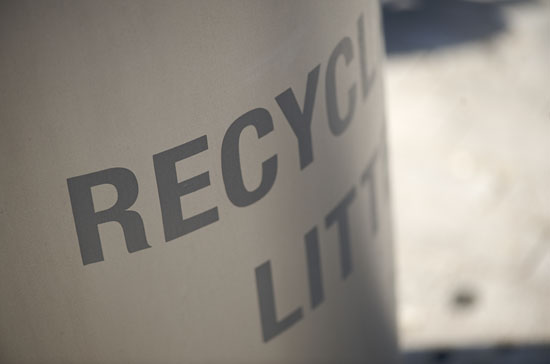 In general, recycling bins can be of a smaller volume (although more bins will be required), both due to the fact that there is a lower quantity of single stream waste, and in some cases, also due to the density of the waste being much higher. Waste paper, for instance, can be especially dense as there is very little air tapped between individual items. Unfortunately, there is plenty of evidence that recycling bins in the public realm tend to be abused and little of the litter placed in receptacles has been correctly sorted. 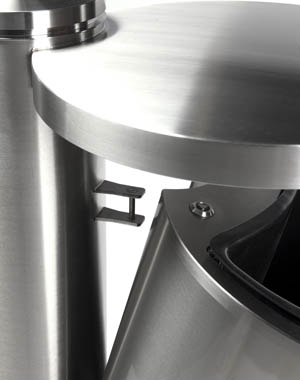 Another important aspect to consider is the locking system. Locks and hinges must be particularly robust, being subjected as they are to daily abuse and potential clogging by refuse and viscous or sticky liquids. For speed and simplicity of operation, single point mechanisms are the preferred method of locking a bin. All locks must be slam-shut, so that a key isn’t required to close the door, minimising the time required by the operator and the likelihood of a door being left open (and then more likely to be subject to abuse or theft). Many bins now incorporate an integrated ash & gum bin, which removes the need to have two separate items of furniture. This system also provides a facility to extinguish cigarettes surface which is easily cleaned, preventing damage to other parts of the bin’s finish from stubbing. A desirable design feature is to allow the ash & gum device to empty directly into the main bin area, saving time spent by the operator. Another important element to consider is the aperture:

‘Value’ can be interpreted in a number of ways. The most immediately obvious might be to use low-cost materials in construction. However, this doesn’t mean the provision of a black plastic bin is always the cheapest option as the product’s lifetime must also be taken into account since a bin with a very low initial purchase cost is unlikely to last long before requiring repair or replacement. Therefore a balance of initial cost versus durability must be reached. Materials such as mild steel and concrete are both also relatively low cost and if finished correctly will last far longer than cheap plastics. 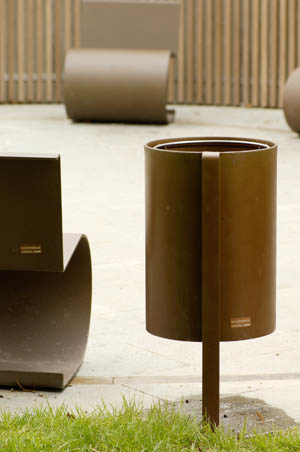 Corten steel used in a bin for visual cohesion with seats and for a robust finish...

Steels are regularly used but, due to exposure to the elements and corrosive liquids such as fizzy drinks, must be treated with an appropriate surface finish. Sacrificial coatings are very common and these include galvanising, zinc flame spraying and zinc-rich primer paints where the zinc content reacts with water or other corrosive liquids, saving the steel from being attacked and rusting. Bins constructed from high-cost materials, such as 316 grade stainless steel, will tend to offer an extended overall life, as they withstand highly aggressive environments. Stainless steels are naturally resistant to corrosion due to their chemical composition and, with regular cleaning, stainless steel bins can last in excess of 20 years in service. In terms of whole life value, the high original investment then makes a great deal of sense. Concrete is naturally resistant to chemical attack and highly durable, meaning a bin will provide very long service. The drawback is that many concrete bins have historically been supplied in an exposed aggregate finish which makes it an excellent surface for waste to collect in crevices and cause staining. Smooth (etched or polished) concrete is less likely to hold spilt waste on its surface and specialist coatings applied to the surface can further improve resistance to staining.

Open bins not only collect liquid waste from the refuse, such as the final sips in coffee cups and cans, but will also collect rainwater. There are two solutions to manage this liquid waste:

The choice of covering or draining a bin is for the customer to evaluate depending on location. 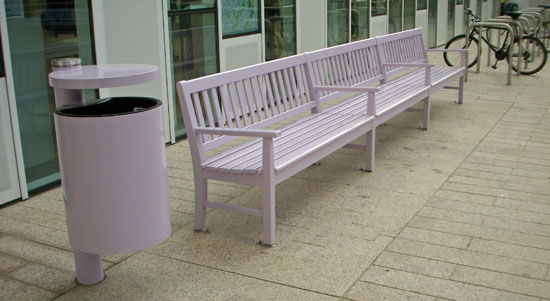 Love them or hate them? Barking wanted their bins pink, so we happily obliged!

The final element to consider is the visual design of the bin. In general, bins serve a purely functional purpose and although there may be many options of colour and finish, they are often not customised.

There are, however, many opportunities for branding with logos, colour or recycling information to make a product work harder and provide more value. From an architectural point of view, if a bin is to be placed in a well designed landscape, it is preferable for it to bear some resemblance to other elements of street furniture in the immediate area, in order to create a more cohesive aesthetic. 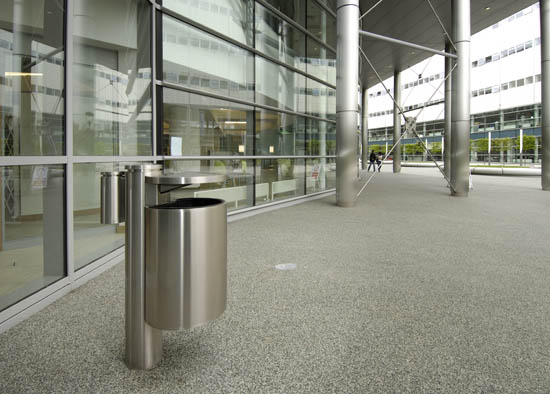 The ultimate goal must be to make a bin look less like a bin, whilst still retaining all the functionality required and offering a reasonable overall life cost…