Crash-tested landscape furniture: why functional will no longer do

Asking whether architects value aesthetics is rather like asking if a mathematician appreciates numbers.

But if aesthetics in the built environment can be elevated only at the expense of security or safety standards, then architects must grudgingly concede to the demands of functionality.

The involvement of heavy goods vehicles in two atrocities in Europe in 2016 – in Nice in July and Berlin in December – tragically highlighted why the deployment of robust physical barriers is a growing priority in public spaces. Together killing 98 people and injuring 490, they were brutal reminders that vehicles can be every bit as destructive as bullets and bombs.

Crowded places such as shopping centres, plazas and sports stadia perimeters increasingly need barriers that can withstand vehicular attacks as they are prime targets for terror plots.

Then there’s the ever-present threat of cars veering off the road because the driver is reckless, drunk or asleep. Protective design can deter, delay and prevent vehicle collision around accident blackspots.

But urban planners are mindful too of the adverse psychological impact on citizens of erecting imposing barriers too liberally. Another consideration is permeability: pedestrians must not be impeded along with rogue truck drivers. It’s no surprise, then, that more design-led forms of security barriers such as crash-tested seating, planters and cycle racks are gaining ground with architects and specifiers.

But how easily can urban planners find crash-tested street furniture that is not only visually appealing on its own merits, but also in keeping with the location’s wider architectural style?

When it comes to street furniture and perimeter protection in public spaces, a leading manufacturer of products in this sector believes that, all too often, architects are forced to compromise their architectural vision.

Marshalls, the UK’s leading hard landscaping manufacturer and street furniture specialist, believes that, while security must always be paramount, traditional forms of protective street furniture can often be too imposing and have a detrimental effect on a landscape’s visual appeal. 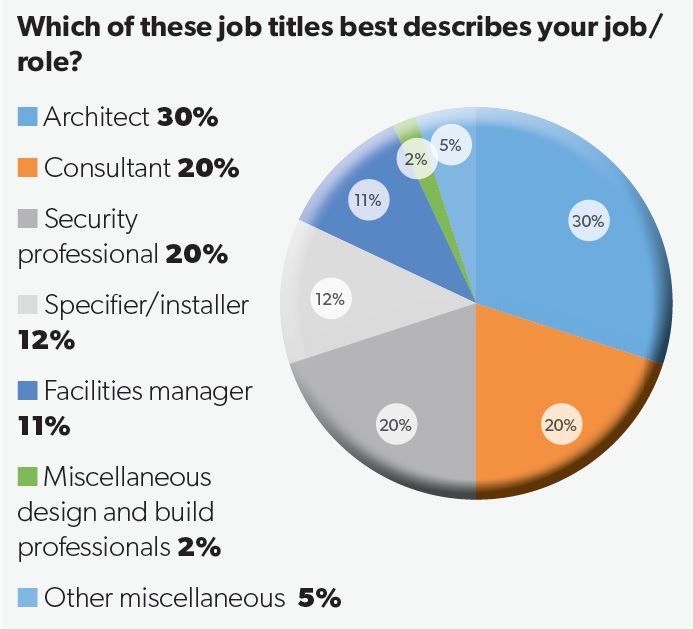 With around four in five (79%) respondents involved in a growing number of projects specifying aesthetically-pleasing, crash-tested perimeter protection over the last three years, there has apparently been a sea change in priorities when it comes to urban planning briefs. 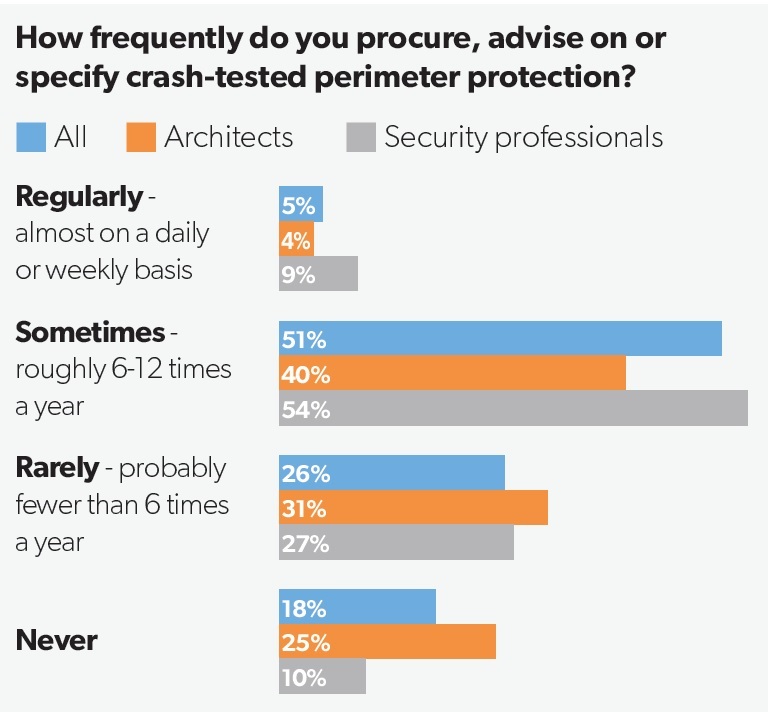 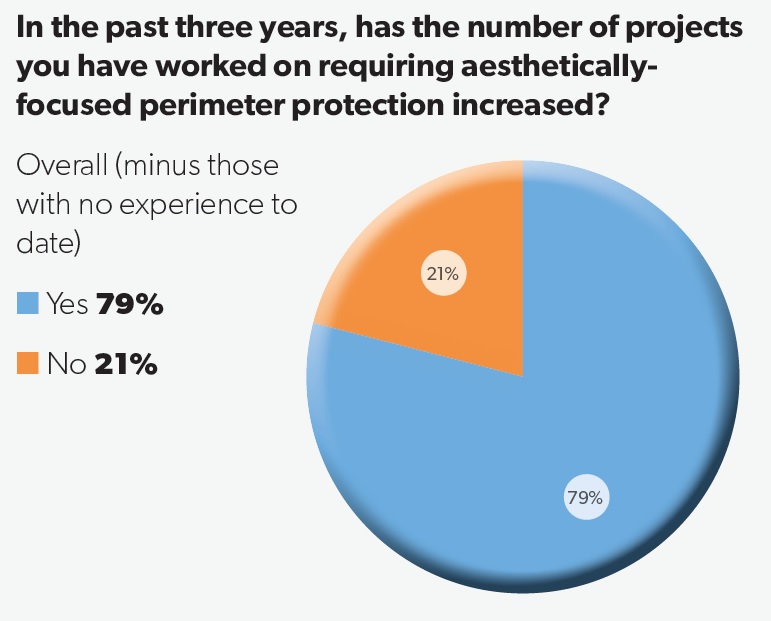 Architects were much less likely to report a rise in such projects – with 59% saying they had seen an increase versus 41% who hadn’t – than non-architects, who were split 74%- 26%.

Nevertheless, it’s still a clear majority. City planners are increasingly unwilling to compromise on aesthetics as they bolster security in the urban environment.

There’s obviously a clear and growing appetite for aesthetically-pleasing, crash-tested perimeter protection – but have manufacturers kept up with a trend observed even within a short, three-year timespan?

Apparently not, our survey findings indicate. 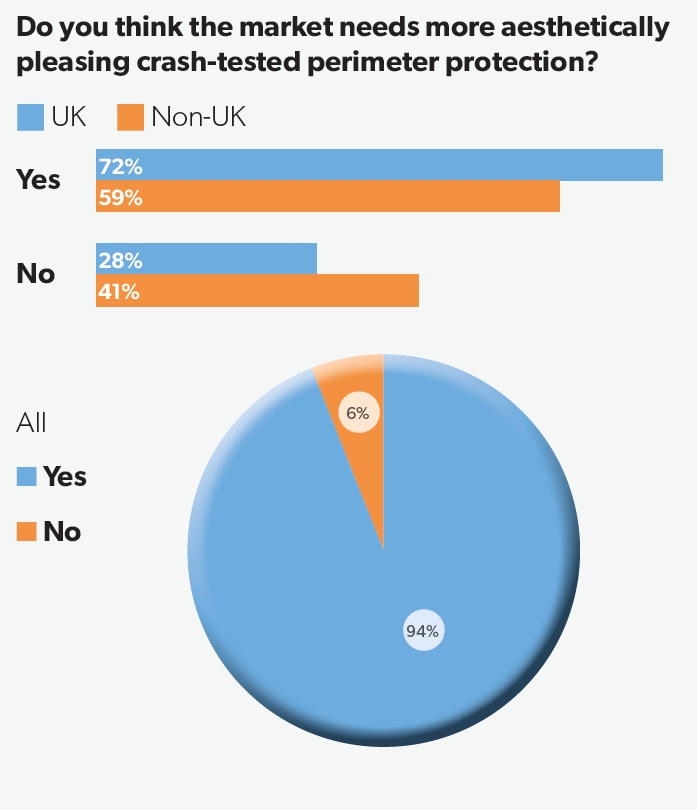 Demand for a wider range of aesthetically-pleasing, crash-tested perimeter protection than is currently available is enormous – equally so regardless of who we asked in the design and procurement chain, or where they were based in the world. Asked if they thought there was demand in the market for more of these products, a resounding 94% agreed.

Security professionals were equally as emphatic in their desire for more visually-appealing security products, with 95% wanting more choice in the market.

Steve Reddington, street furniture commercial director at Marshalls, says the findings back up the company’s own, anecdotal experience. “The research confirms the conversations we are having with our customers in the security industry,” he says. “We work closely with many landscape architects, and from the conversations we are having, it is clear the market is changing.”

Mindful of this reservoir of untapped demand, Marshalls has pioneered a paradigm shift in how street furniture and crash-tested perimeter protection can coexist more harmoniously: by combining the two in the same product. Traditionally, efforts to minimise the visual price paid for security measures have centred on making bollards and barriers as unobtrusive and congruous with the landscape as possible (for instance, sleeves can be placed over bollards). Marshalls, however, thought outside the box – or rather, outside the ‘ring of steel’.

By consolidating protective barriers with street furniture, Marshalls hopes that architects never have to compromise on aesthetic or utilitarian goals when designing public spaces. Where once they might have to specify a seat and a bollard – or reluctantly jettison the seat – now they can just specify a protective seat.

Applied to public spaces, governments, architects and the general public have come to recognise the truth of the expression ‘less is more’. Decluttering is in vogue.

With the UK population growing by half a million annually (ONS) and the number of people living in urban areas globally expected to grow by 2.5 billion by 2050 (UN), the challenge of keeping pedestrian traffic flowing underpins the growing importance of decluttering.

But not everyone in the industry has embraced the concept of protective street furniture. Many involved in the built environment fear that it fosters homogeneity and blandness in urban landscapes.

The challenge for manufacturers of street furniture, therefore, is to prove such fears unfounded through an innovative, design-led approach. They must equip architects and specifiers with the means to complement, rather than jar with an urban landscape’s prevailing style – and this must apply to a wide range of colours and styles, both traditional and modern.

The aesthetic value of a product even trumps price when respondents were asked to rank their priorities when procuring crash-tested perimeter protection. Given the nature of the product, it is understandable that performance was accorded a higher priority than cost too.

Nevertheless, it is reasonable to surmise that only a lucky few in the architect profession can honestly claim that money is truly no object in their latest project.

The choice of materials has a huge bearing on both the cost and performance of protective street furniture, often in inverse proportion to one another. Whether composed of precious stones, polyurethane, concrete or stainless steel, the key is giving the architect a wide choice of options that meet their particular needs – in terms of budget, security requirements and architectural style. ‘Bespoke’ is the watchword for modern architects who often have a recognisable signature style.

The overwhelming demand for a wider choice of products noted in the previous question suggests specifiers’ needs aren’t being fully met.

Local and central governments have long recognised the role architecture and urban landscapes play in attracting skilled workers and inward investment. Furthermore, the ‘broken windows’ theory, which has informed public policy since the 1980s, suggests that urban spaces that are pleasant, well-maintained and visually appealing are less vulnerable to vandalism and antisocial behaviour.

In this context it is easy to see how not just architects, but also security professionals and others involved in urban planning, would be mindful that – as far as is feasible – these factors should go hand in hand when planning a public realm environment.

Thankfully, street furniture can play a key role in preserving the architect’s grand vision, even as 21st century spaces are fortified against vehicular or explosive attack. But is there enough crash-tested street furniture on the market to meet the eclectic demands of urban planners?

Street furniture has certainly been integral to the elegant plazas, canalside developments and gleaming business parks that have driven the regeneration of Birmingham, Glasgow and other UK cities once disparaged as architectural backwaters.

It is surely no surprise, then, that architects and other specifiers should be overwhelmingly interested in at least 2-3 crash-tested versions of lighting, seating, bollards, planters, litter bins and post and rail products. Only 6% professed to not be interested in any. 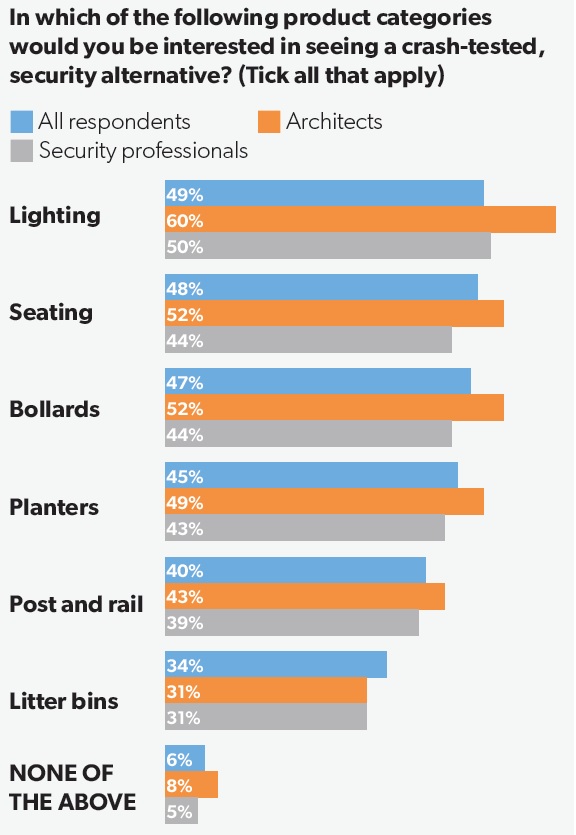 Ranked third out of six options given, demand for the tried-and-trusted bollard remains strong even as imaginative alternatives emerge. Nevertheless, comparable levels of demand for crash-tested lighting, seating, planters and litter bins suggests that bollards are no longer the default choice of protective barrier – at least when specifiers are aware of the existence of alternatives that fit their architectural blueprint. As crash-tested furniture becomes more diverse and well-known, bollards may well slip down the table.

It’s clear that there are now more sympathetic security solutions available on the market other than imposing lines of steel bollards. Not only can security products enhance a landscape visually, but with the introduction of urban greening, a space can be safe while also improving overall wellbeing.

In commissioning this report Marshalls sought to gauge the importance of aesthetics when it comes to the specification of products where security must always be chief priority. We also looked to find out if professionals working in the built environment are aware of the growing number and variety of products – from Marshalls and others – that could satisfy growing demand for crash-tested, yet elegant, street furniture.

The five key findings from the report listed below suggest the answer to the first question is a resounding ‘very important’, while the consensus around the latter is almost as decisively ‘no’.

Fashions change in landscape architecture just as they do in other visual fields. Nevertheless, architectural historians of the future might, we could reasonably speculate, look back at the past 25 years as a big step forward for urban planning in terms of quality-of-life benefits to citizens.

But the dramatic elevation in the terror threat over recent years has thrown down a new challenge to architects: making public spaces as secure as possible without undermining the aforementioned gains. Citizens shouldn’t feel like they’re living under martial law.

The findings from our survey, along with the trends explored above, suggest that the future of protective street furniture will be defined by its discrete incorporation within design-led products like seating, lighting and planters. 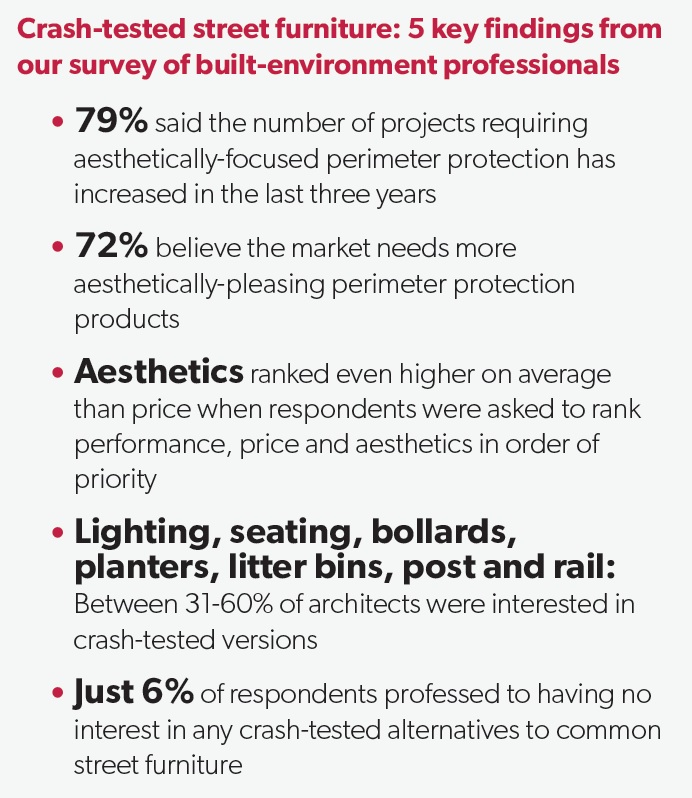