With the announcement of a Wandsworth school as the winner of the 2015 RIBA Stirling Prize, we find out whether its updated take on the design of the school campus has inspired its students.

Burntwood School in Wandsworth has been named as 2015’s winner of the UK’s best new building. Redevelopment of the 1950s girls’ comprehensive school was completed in 2014, and brought together two of the remaining old buildings with six new ones designed to carry on the campus-style feel.

Since 1996, the Royal Institute of British Architects has given the Stirling Prize to “the architects of the building that has made the greatest contribution to the evolution of architecture in the past year”. In mixing new and old to create a fresh take on the ‘campus’ look and feel of architecture, Burntwood School’s victory sees them join an elite group of outstanding work in the field.

With the buildings’ shaped concrete façade providing a striking first impression, and products from our Loci range of furniture enhancing the ‘campus’ feel, we look at how great school design can foster some much-needed confidence in its users.

Burntwood School serves as a fine example of great architecture transcending its mere physical qualities, as pointed out by the director of 2015 Laureates Allford Hall Monaghan Morris, Paul Monaghan:

“Schools can and should be more than just practical, functional buildings – they need to elevate the aspirations of children, teachers and the wider community. Good school design makes a difference to the way students value themselves and their education, and we hope that Burntwood winning the RIBA Stirling Prize shows that this is worth investing in.”

For too long schools have been built with only capacity in mind rather than purpose. The careful considerations made in the buildings’ design and other appropriations to the surroundings at Burntwood have been created with the students’ benefit in mind throughout the design and building process. 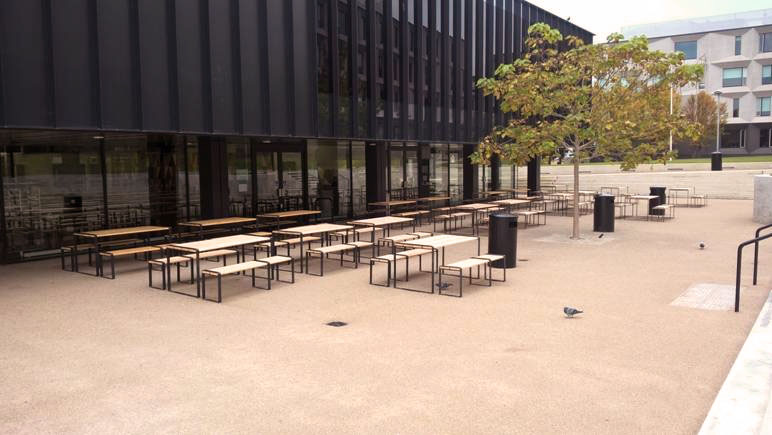 One notable way that this school differs from your typical educational establishment is the amount of natural light that the buildings let in – here students and teachers alike are treated to a view at the end of every corridor, and day-lit communal areas. The old cliché that schools can resemble prisons is dispelled here.

The old buildings, designed by the legendary Leslie Martin in the 1950s and 1960s, are typical of the college-like campuses that London councils had set to work on building at the time. From the original design, the assembly hall and swimming pool have been held over, bolstered now by six new faculty buildings with chamfered precast concrete panels, adding a sense of grown-up modernity to the exterior that you’d be unlikely to find on your typical high school.

But the buildings’ maturity is all part of the plan. It’s long been thought that incorporating these elements of adulthood into building design would entrust its users with the same sense of responsibility. Treating the students of the school with the respect afforded to them by this privileged build could potentially encourage them to treat others, both inside and outside school, in the same way.

A recent article in The Guardian[1] discussed how buildings that were “simple, serviceable and completely devoid of all personality” may have dented the confidence of its bright-eyed inhabitants over a period of years, and how comprehensive schools had failed to spark many of their most precocious occupants into high achievement. The accounts in the article that point to these buildings’ failures point out many of the same faults: ‘tiny windows’ and ‘breeze-blocked walls’. That the design and construction of Burntwood School has addressed these concerns by offering rooms which the Telegraph[2] calls ‘gracious and full of light’ says a lot for the modern attitude taken by architects towards a form of campus building that treats its users as astute students rather than grumbling pupils.

A school that promotes this modern feel should have the facilities to make students feel like a user of the space rather than a subject of it, which is why the range of Loci furniture provided by Marshalls helps expand that current attitude.

We provided a number of pieces of Loci street furniture – picnic tables and benches – for use in the school’s outdoor common area. Both under the shelter of the building’s exterior and out in the open space, students can eat lunch and socialise using the Loci furniture, much like you’d expect to see ‘on campus’. It’s been an enduring trend Stateside – from high schools to corporate headquarters, the idea of setting up breakout areas in which users can enjoy a more informal setting provides a huge boost to morale.

The furniture comes as the perfect accompaniment to the clean concrete face of the school; with its light, clean lines and streamlined yet striking visuals, the use of the Loci range at Burntwood was said to have ‘brought the building alive’ by project architects Allford Hall Monaghan Morris. The shade of Emeri timber deployed onsite is pitched perfectly against the paving underneath, and is finished with a UV-resistant polyester powder coat to ensure the surfaces are well protected against the Great British weather. Also, the steel used in creating the Loci range is fabricated only 8-10mm in depth, ensuring that the furniture isn’t in danger of distracting from the sleekness of the space.

Coupled with Loci’s non-symmetrical supports, the whole piece combines a uniform look suitable for schools with a neat design quirk that displays its users’ individuality.

Set inside this little piece of paved personality, the Loci range provides ergonomic support and an overarching theme which brings the whole outdoor scheme together so cleanly.

As Paul Monaghan said, a winner of the Stirling Prize should be recognised for its ability to uplift its users and bolster their sense of self-worth. The idea that students can feel pride for their surroundings should in turn inspire them to make the best of the school day. In working closely with the architects and key decision makers at Burntwood School, we feel a great sense of pride in helping to foster a spirit of community for students and teachers alike.