Cities change dramatically over the course of their lifetimes depending on population and developments in local industrial activity. The growth of industry and the use of the automobile has had a huge impact on cities across the world at various times. Now, as citizens’ habits change once more, and the concept of the liveable city starts to take precedence, cities are reversing some of that impact.

Here we examine various disused or overworked spaces which are being repurposed, having only been accessible to industry or transport infrastructure in the past. In their new, often green, healthier incarnations, they are an important part of the public realm, improving quality of life for citizens, and making cities more liveable.

Industrial buildings can spring up to meet demand, running over greenfield sites or residential areas in the name of progress, often to the economic benefit of the conurbation they serve. However, when industry moves on and the buildings fall out of use or become obsolete, it’s not a simple operation to restore the landscape to other uses. These cities have taken the ruins by the horns and transformed disused industrial sites into liveable, walkable, enjoyable spaces.

The 20 acre point stretching into Union Lake was cleared in 1906 to become the site of the former Seattle Gas Light Company coal gasification plant (later converted for oil-to-gas use). When imported natural gas made its produce obsolete in 1962, the City of Seattle bought the plant for park purposes.

The site was opened to the public in 1975, and numerous pieces of old plant were left standing as ruins or adapted slightly to new purposes, preserving the historic and aesthetic value of the site. The repurposing work also necessitated soil and groundwater clean-up activity, a process that took until the mid 80s to complete. The result of this project is a park beloved by the citizens of Seattle, a gathering place for recreation, celebration, and even political movement.

Glasgow’s industrial history is rich, and the shipping trade has left a significant legacy of buildings and infrastructure behind it. The project to regenerate the disused areas has been extensive, creating residential and office spaces as well as leisure facilities to bring life and people back to the banks of the Clyde. 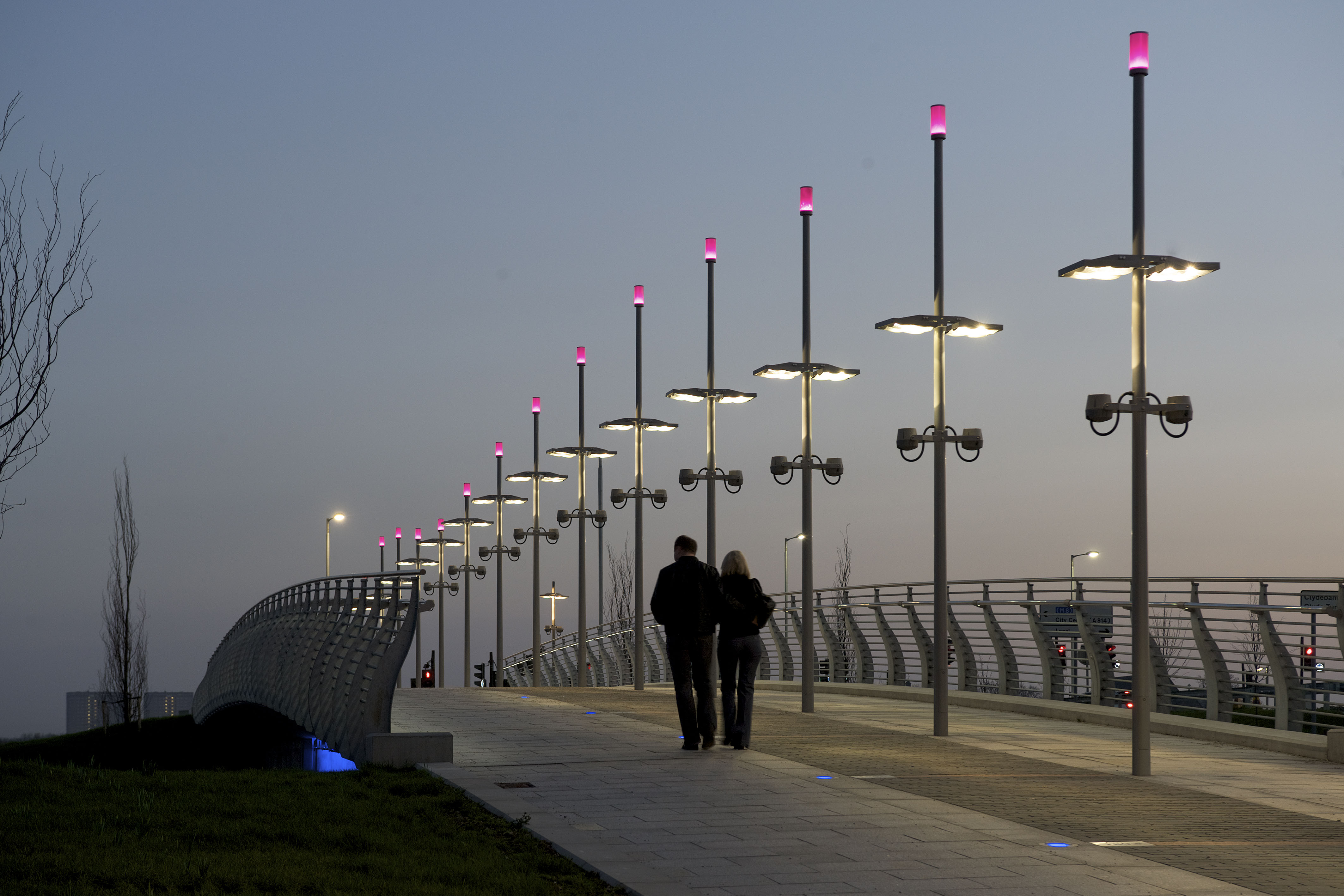 As part of the refurbishment of the harbour area, Woodhouse (Bespoke Product Solutions for Marshalls) designed and manufactured a balustrade system and lighting for a bridge over the A814. The crossing forms a unique entry point into a new economic development, connecting the regenerated area to significant local landmarks including the new Riverside Museum. 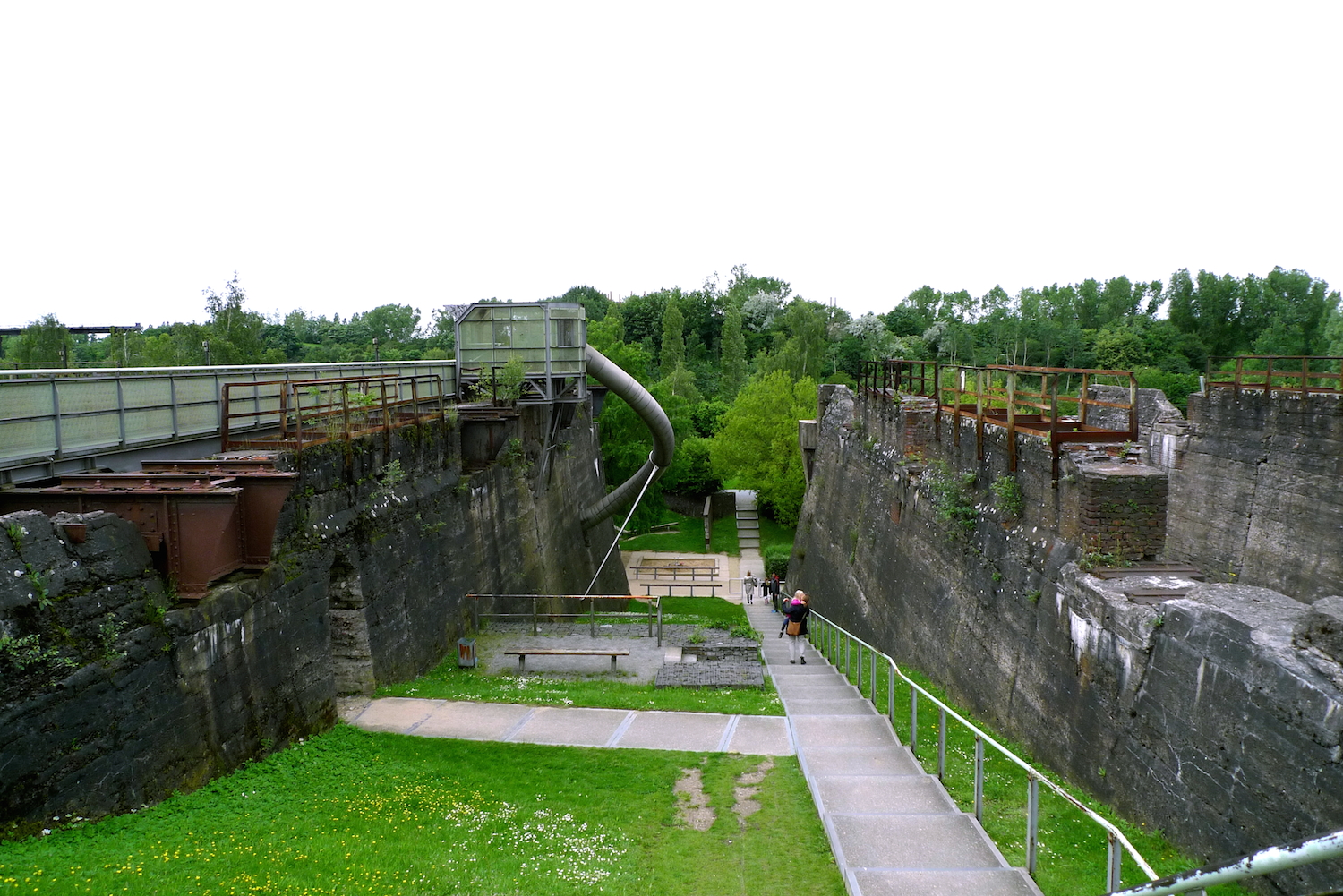 North Duisburg, Germany, is the site of a complex of parks, water- and walkways, that was once a blast furnace plant. Like the Gas Works Park, features left over from this site’s period of industrial use formed a pattern for the new development to follow. Contaminated structures have been demolished, but a meadow spreads in their place, while an old high-level catwalk looks down over gardens. There are also playgrounds constructed around former industrial features, and a clean water system incorporating old canal and watermill installations.

Repurposing transport infrastructure As populations and industries fluctuate, so does the infrastructure that supports them. When railways are abandoned, the reuse of the land can make a huge difference to residents, and to the ‘placehood’ of a location. Areas that would otherwise have been left derelict, open only to the most adventurous of ‘urban explorers’ can provide walkable recreation space.

A recent and very prominent example of repurposed railway land is the New York City High Line Park, which occupies a portion of the former West Side Line. The elevated railway was constructed to avoid accidents between freight trains and other traffic at the many level crossings. Its heyday was proceeded by a steady decline in railway traffic, and it was closed in 1980. 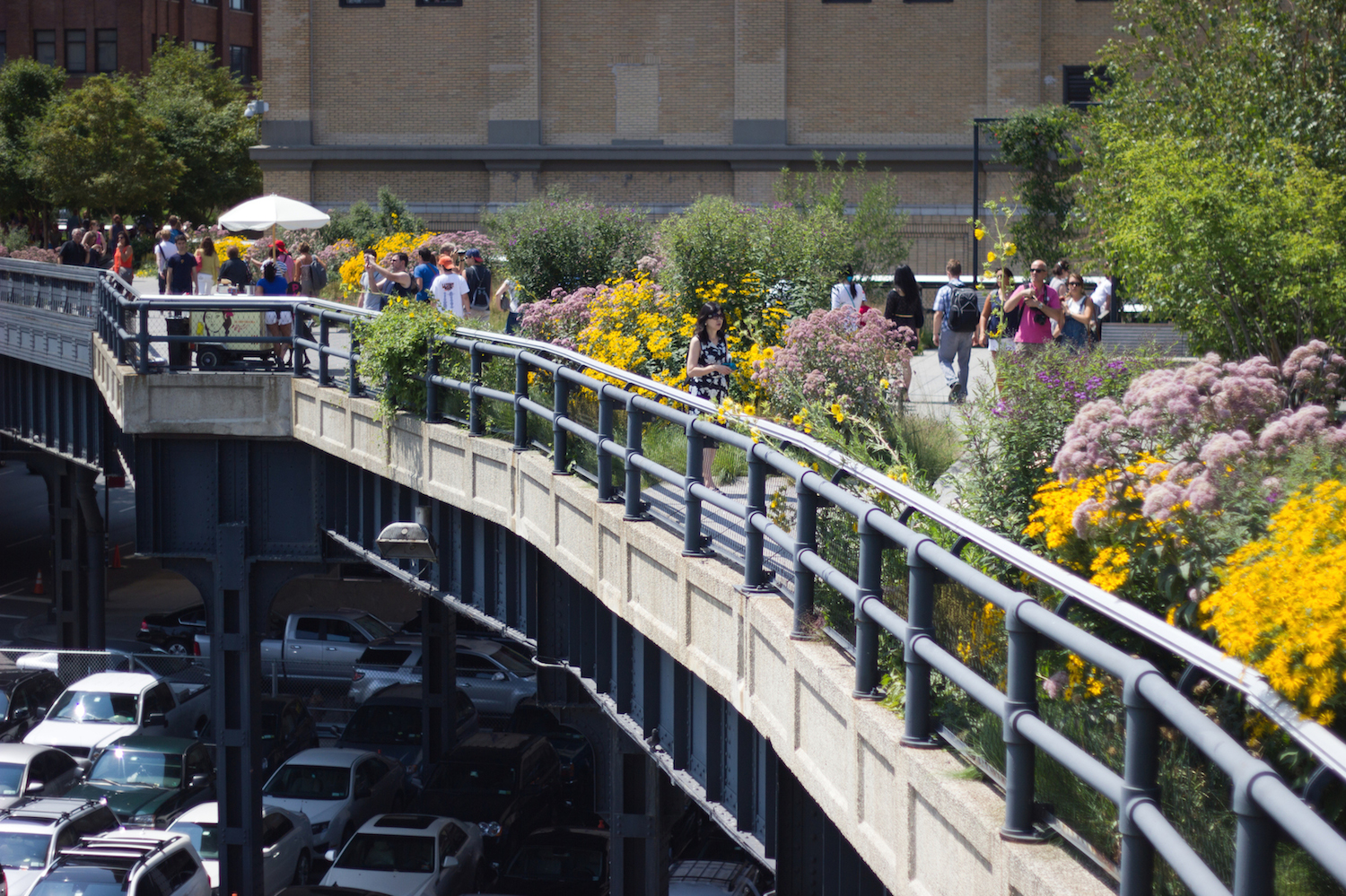 Local property owners petitioned for its demolition, but the line remained structurally sound. In 1999, the Friends of the High Line was formed by a pair of residents, and a campaign was started to preserve the elevated railway as a public green space. Inspired by the Promenade Plantée in Paris, support for this project grew over the years, studies found the project to be economically rational, and work began in 2006. 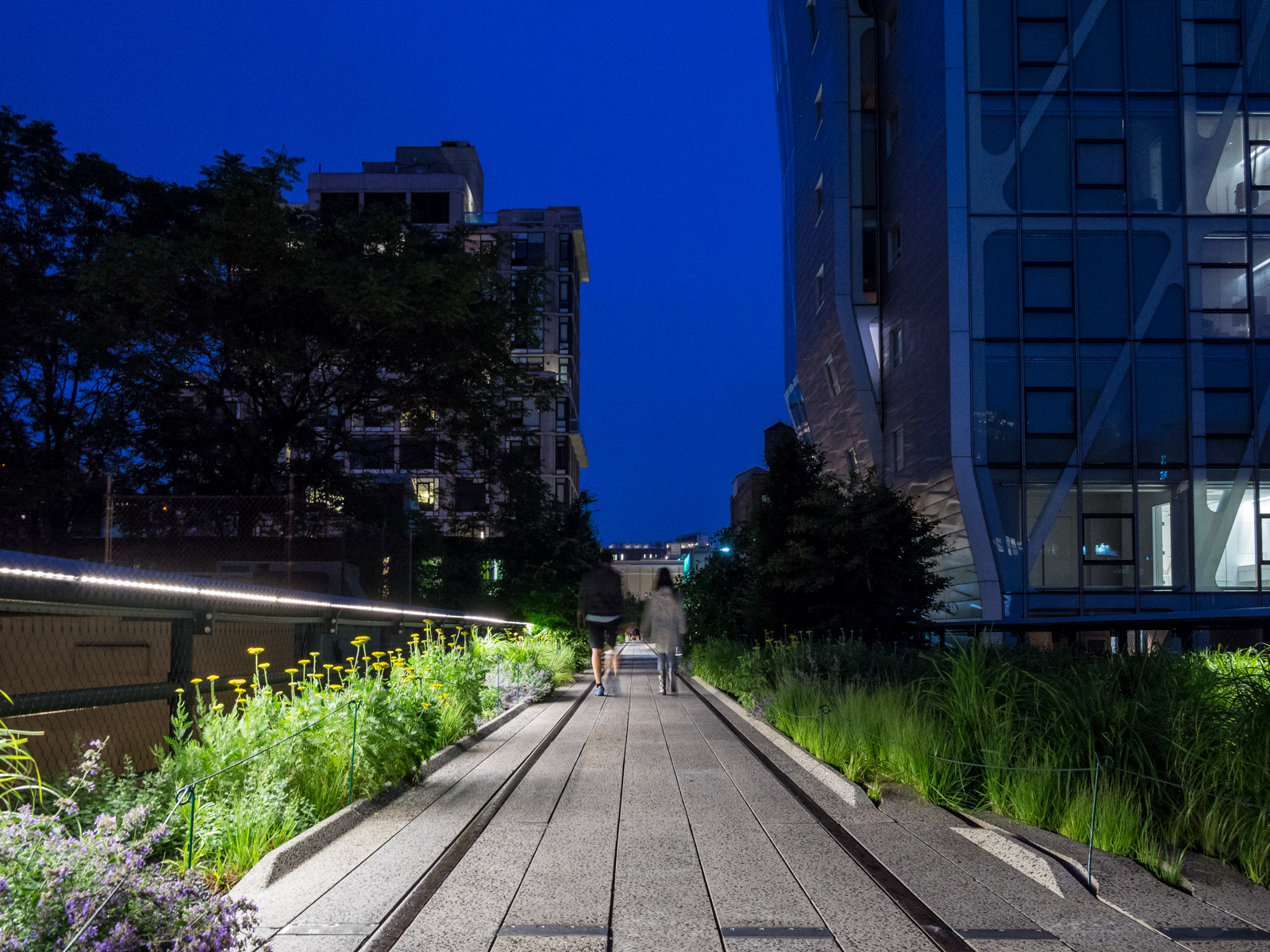 Completed in 2014, the result is a 2.3km linear park with spectacular views of the city and the river Hudson. The planting design is influenced heavily by the hardy shrubs and trees that sprang up on the line during its period of disuse. The park is lit at night and features plenty of seating, although litter bins have intentionally been omitted from the street furnishing plan. The High Line Park has stimulated businesses and developments, including a hotel that is built straddling the park.

In some cities, the process of repurposing is more proactive than renovating derelict or disused land. The removal (or repositioning) of central urban highways is becoming more common. Cities that have implemented these drastic changes have not found huge increases in congestion, as often feared, and there is a genuine positive difference for citizens who use the spaces. 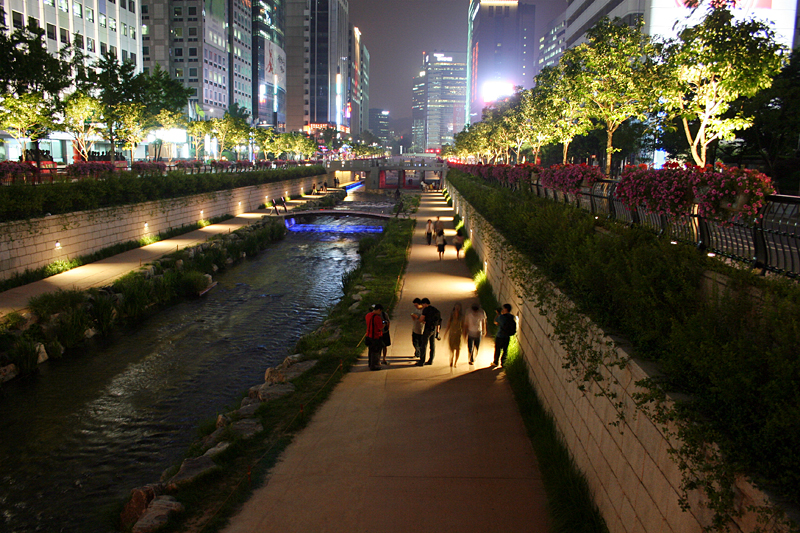 This highway removal project naturalised a waterway that had once run through the area. The elevated highway was originally built to improve economic conditions in a part of town that had become a slum. In 2003, the then-mayor announced plans to remove the highway and restore the stream, turning the land into a beatified public space. The results have included a drop in atmospheric temperatures, an increase in fish, bird and insect species, an increase in public transport usage, and – paradoxically – a decrease in the number of vehicles entering central Seoul.

Rather than remove the M30 highway that follows a stretch of the Manzanares river in Madrid, planners moved the roadways underground. This freed up 820 hectares of riverbank for a huge new development entitled ‘Rio Madrid’. It includes new sports and leisure facilities, 17 different play areas for children, bike paths, a rowing course, and even an urban beach complete with water jets. More than 5000 new trees have been planted, old bridges have been restored, and 11 new footbridges have been built.

All these projects build the placehood of areas and sites that previously would never have instilled a sense of ownership in residents. The ability of cities to adapt and reinvent themselves to better cater to the needs of citizens, and indeed enhance their wellbeing, is what makes them successful and enjoyable places to live in. In spite of the challenges such projects present, more initiatives like the High Line are planned elsewhere in the US and beyond. We can expect to see more multi-use spaces bringing inward investment in regenerated locations, all the while acknowledging and preserving the industrial heritage that came before. The benefits of reusing infrastructure, and making cities more liveable without having to build from scratch, are plain to see.