The future of 3D-printed buildings

It’s being touted as the future of the construction industry, and could even be the go-to building technique when man makes its first tentative steps into space colonisation. But before the hype about 3D-printed buildings can take full flight, it’s up to the experts to decide whether or not it makes the grade in its existing form. Here we look at the world’s first 3D-printed construction and see if it’s a promising start.

One of the most promising tech innovations of the last 50 years – if not ever – is the 3D printer. Early models used the process known as additive manufacturing to etch designs into photopolymers in order to create real, tangible objects like machine parts. The machines’ accessibility and ease of use allowed engineers to create prototypes of their product without having to convince their bosses to spend valuable time and money chasing down its potential.

At first, and as with any technological breakthroughs, only the companies and creators flush with cash – or at least, those prepared to invest in its potential – were bringing in 3D printers to optimise their processes.

Now that the technology has become more affordable, and more widely used – even starting to enter the homes of hobbyists – we can more grasp its potential. That’s exactly what one project in Dubai has done for us. Always believing in bigger and better, senior government officials drafted in a Chinese company to design what’s been dubbed ‘the office of the future’.

Not content with the ability to replace machine parts, or create mugs from their own designs, Yingchuang Building Technology Co went above and beyond in delivering the 3D-printed components to construct an entire building. 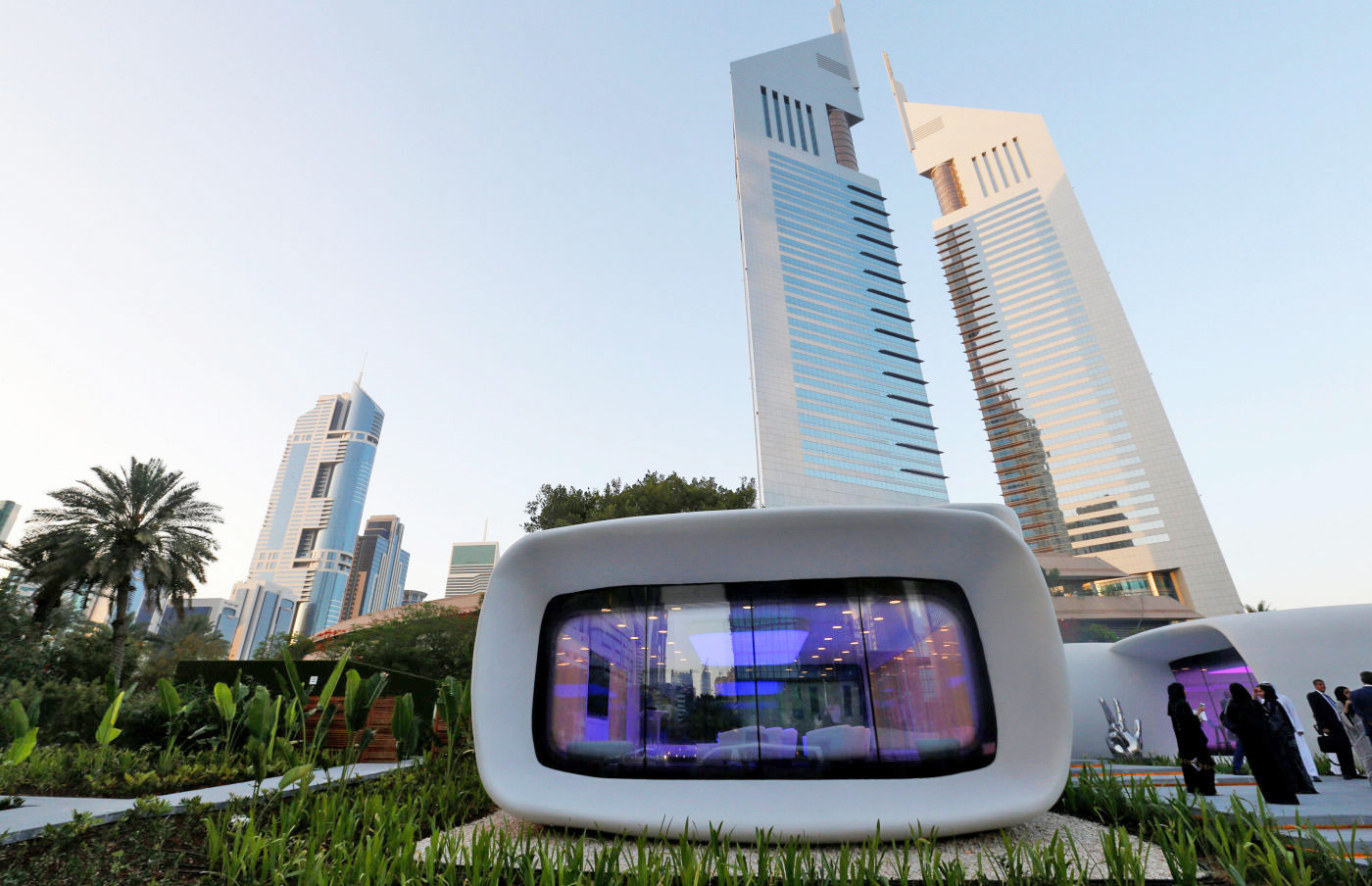 Dubai is already famous for its ambitiously inspiring constructions, but with their printed walls in tow, here the stage was set for a world first which could redefine the way we think about the use of building materials and how to make the most of our office space.

What’s more, work on the project was completed in a little over two weeks on a budget of under £100,000.

The office building was made from a specially-prepared cement that was printed in built-up layers to form each of its components once set. The actual ‘printing’ took place in Shanghai, before the pieces were shipped to the site in Dubai, on a 3D printer measuring 36m x 12m x 6m. A six-metre high printer would once have been the stuff of fantasy – a modern update on Alice in Wonderland, perhaps – but has now been incorporated into a real-life design project.

What is suitably set to become the temporary headquarters of Dubai’s Future Foundation was built near Emirates Towers in just 17 days by 17 workers, who installed the components and fitted out the office.

Office of the future

The newly-christened ‘office of the future’ contains all mod cons, plus a number of energy-saving features. Even more impressive are design firm Gensler’s estimates of the waste and costs that the project saved. Its figures indicate that, rather than the normal rate of construction, printing out the building components has saved them 80 percent in labour and up to 60 percent in construction waste. The Dubai media office is equally positive about its estimates, saying that the work has saved planners the cost of half the average outlay.

The finished building was formally opened in late May, and there are plans to see it eventually become Dubai’s ‘museum of the future’ – a designation that more than befits its design. But best of all, the building fits in seamlessly with its surroundings. There are no quirks of design that trumpet its futuristic credentials; no space-age spirals or Death Star-esque dark touches. The final product touts nothing more than the ground-breaking processes that brought it to life – and that’s more than enough to get the design community excited about its prospects.

Dubai wants to be the 3D-printed capital of the world. By 2030, the emirate aims to print a quarter of its new constructions. This may seem an audacious delivery date, but the constant influx of investment makes Dubai a financial force to be reckoned with. Judging by the result of this outstanding project, its cost-cutting claims may hold water – and if they do, Dubai will be only one of many places that’s vying to make the most of this revolutionary technology.

In 2014, a Chinese company ‘printed off’ 10 full-sized houses in the span of a single day, while a Singapore enterprise has raised more than $80 million to assemble concrete components for a variety of residential uses.

There’s been ever-increasing improvement in the search for more efficient and cost-effective building solutions, which has led to developments in concrete fabrication that satisfy challenges in a number of conditions like weather, manpower and time.

And as we consider the growing credentials of 3D printing, as with any advance in technology we can’t help but look to the stars.

With the incalculable logistical costs, not to mention the more practical problems like trying to dry concrete in a zero-gravity, zero-oxygen atmosphere, the prospect of extra-terrestrial colonisation is always limited to the realms of science fiction.

But with the ability to construct in one place and assemble elsewhere, the Dubai project has shown that there’s now a cost-effective way to run an architecturally sound build. For now it can be no more than a pipe dream without serious investment of time and money, but engineers and sci-fi enthusiasts everywhere can now start to wonder as the possibility draws ever so slightly closer that one day, man can build on the moon.

Until then, Dubai’s ‘office of the future’ and its ilk can continue to prosper with the engineering know-how its industry has shown. On Earth if not in space, there does exist the very real possibility that, with the right investment in this pioneering technology, and its responsible use, 3D printing could become a staple of the construction industry.