This City Was Made for Sharing – Shared Space in Urban Design

It may seem logical to assume that we all share the same urban space: cyclists, pedestrians, drivers. But that’s certainly not how people feel, and most urban design doesn’t seem to resonate this idea either. How many drivers do you know have you heard criticizing cyclists, complaining that they do not respect the rules of the road? Or likewise, how many cyclists complain that drivers do not make their preferred form of transport a particularly easy one?

These sorts of attitudes show us that many regard other road users as being something of a nuisance. They share the same space, albeit reluctantly.

Designers, researchers, and engineers are beginning to answer the question of how we should be sharing and using the same space, resulting in radical new designs that not only change the way our cities look, but how they feel. The crossing in Oxford Circus is an example of such a design, and concepts such as shared space are looking at ways of re-imagining the relationships of road users. Does an urban space that removes features such as traffic lights, barriers and signs sound like a good idea? While controversial, it is precisely ideas such as these that will have the ability to shape our spaces for the better.

The thinking behind shared space brings into question the way we have approached urban design since vehicles began to emerge on our streets. There has been an assumption that the only way to preserve the safety and efficiency of our streets is to use segregation - separating the vehicle traffic from the pedestrians; separating the pedestrians from the cyclists. Architect and traffic consultant Ben Hamilton-Baillie said on the BBC 4 radio show Thinking Streets that:

“it wasn’t until the early 1970’s, particularly in places like the Netherlands and Denmark, Sweden and Germany, that a few thinkers began to question whether isolating traffic from other aspects of life, really provided either the safety or the efficiency that cities needed.”

While it might seem counter intuitive, removing the standard signals we’ve begun to expect (such as traffic lights or signs) and simplifying streets, provided the right “social messages” are being conveyed to street users - the safer streets became.

Let’s take a closer look at a recent example of shared space. 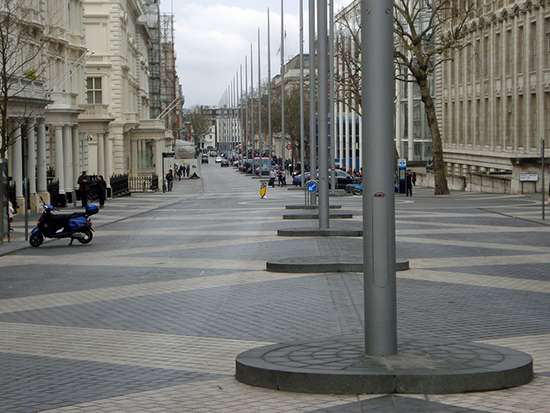 In order to reflect the artistic and cultural heritage of London’s Exhibition Road, a space that allows access to some of our most important national institutions such as the Natural History Museum and the Science Museum, a design competition was held in 2003 to help bring improvements to the streets design. The result was a shared space that is not without its critics; even those that believe in shared space, remarking that it isn’t a true shared space as some compromises had to be made. Compromises such as the provision of private parking spaces and tactile paving elements to denote where pavements would normally be as a result of a court case involving the UK charity Guide Dogs. There are also some signs remaining that look out of place in what should ultimately be a sign-less environment. But despite this, many see it as a triumph for the shared space movement. Rowan Moore said in The Guardian that:

“The overall effect is of generosity and calm. Crowds can flow more happily over the paving and the route from South Kensington tube to the great museums, which was always a tricky one unless you took a long subway, is now a pleasure.”

The street is patterned with criss-crosses in the paved surface, denoting that it is an open space, welcoming of pedestrians. There is a lack of clutter, and the slower pace (from the reduced speed limits) affords the space a more pleasing, relaxed feel. However, the street is still plagued by issues that are holding it back, such as traffic congestion, demonstrating that heavy traffic is certainly not a problem of the past. And there are still signs of segmentation, such as benches appearing in pedestrianised areas away from what could be considered to be a traditional road.

Future projects such as like this need to stay true to their original vision and aims. How can we ever evaluate the effectiveness of shared spaces if compromises to the stated goals are being introduced?

It can't help either that ‘pure’ shared spaces attract so much opposition from charities (and those who they represent) such as Guide Dogs. Any scheme that appears to be worsening the accessibility of our roads is going to have a hard time being approved, at least without alterations.

A few thoughts to ponder then: