Lighting and its effect on bats, birds and insects

In recent months we have heard a suggestion that the Neanderthal’s extinction, 28,000 years ago, may have been hastened by the evolutionary cost of their bigger eyes, necessary for hunting in the dim northern European light, at the expense of extra brainpower to cope with the coming ice-age changes. Homo sapiens backed the right horse and used that brain power to evolve light sources for their surroundings, using in turn, oil lamps, candles, gas and kerosene lamps then electricity.

Streets were first lit with electric lights in the 1870s.  In the 140 odd years since, there has been a speedy evolution, from occasional external lighting to the almost all pervasive lighting of major roads, towns and cities.  This recent rapid increase in the use of lighting has undoubtedly resulted in a safer and more secure environment for humans but does present challenges in terms of the generation of resources needed for this.  For other species there are greater challenges in coping with a well-lit environment.

The effects are most notable on those animals which are most active in the night, particularly bats and insects, but still have impact on diurnal species.  The major effects of lighting on wildlife are: 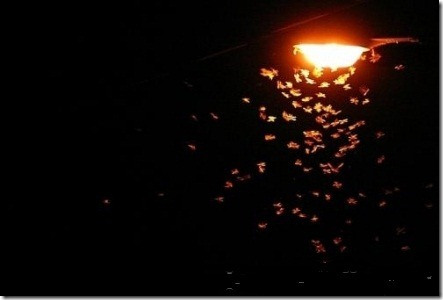 It is likely that this effect was noted when the first bison-fat lamp shone in a cave entrance.  Although the appeal of a flame to moths is well documented, anyone working outside at night will become aware of the host of other night flying insects coming to light, including midges, mayflies, caddis flies and beetles. Whilst flying insects are not generally the household nuisance they used to be inside a house, it is a rare household that uses more than the dimmest patio light on a site overlooking a water body of any size.  Light with a high UV component attracts most night flying insects, an effect well know to lepidopterists who tempt moths into traps using high UV light sources.

Once attracted to and illuminated by light sources animals are vulnerable to predation.  The above lepidopterists provide layers of egg cartons in their traps where moths can hide.  However outside the traps many just hunker down on the nearest surface close to the light and are picked off by opportunistic early birds.  I have noted noctule bats hunting over light sources, picking off insects which orbit the lights.  In two particular instances, one above street lighting and the second  above a flood-lit cathedral, the bats flew in the dark areas above the lights where they could see the silhouettes of the flying insects they were hunting, waiting for them to overshoot the area of illumination.  In both these cases the bats were invisible from the ground – we were alerted to their presence using bat detectors.  However the bats themselves become highly visible to predators above them – especially passing gulls.  It is not known what proportion of bats feeding over lights  are predated by gulls but it is known that gulls will readily feast on bats as they emerge from well-lit colony entrances. 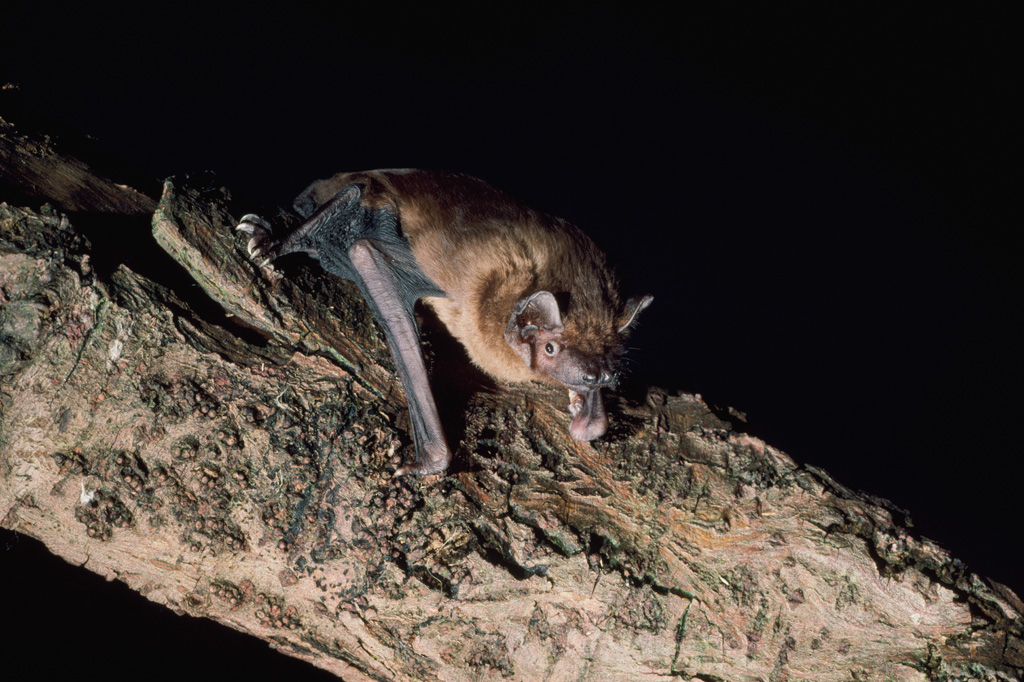 The noctule bats mentioned above are exceptions.  Most of the 17 or so species of UK bats avoid well lit areas.   Animals adapted to living nocturnally are able to avoid predators by avoiding daylight.  There is an arms-race where predators evolve senses allowing them to find prey in the dark, an extreme example being a stone-marten, European relative of a weasel, which was found feeding on bats hibernating in unlit tunnels , 3km  from the entrance and the only source of light.  Nocturnal animals need dark spaces to act as safe corridors for feeding, moving from place to place and finding mates.  Emma Stone at Bristol University has carried out useful research to determine the effects of road lighting on bats. This not only helps to assess the impact of road lighting on bats, but also begins to indicate how roadside lighting can be designed to both keep humans secure but allow bats to forage and commute along the darker sides of roadside hedgerows.

Interruption of diurnal or annual cycles including migration.

If we know little about the above three effects, the study of lighting with respect to other aspects of nocturnal life is in its infancy.  Blackbirds are noted to breed three weeks earlier in urban regions than in rural areas.  Is this due to cities being warmer, or to being well lit?  Is it a combination of these and other factors?  Urban trees shed their leaves more slowly close to street lights, birds in cities are known to sing for longer during the breeding season.  The effects, long term or short term, are unknown and difficult to determine.

What is known is that lighting does affect natural processes and that more research would be welcome.  Meanwhile we are entering a phase where we can do more to protect the natural world whilst still maintaining and enhancing secure human environments.  In particular:

Consider the UV component of external lighting and where appropriate use that with the lowest UV component.

Commission lighting schemes which shield areas with wildlife potential.  Avoid designs which leak light upwards or away from the target area.   Foliage of trees and hedgerows generally should not be illuminated.  Bird and bat boxes on buildings should only be installed in areas likely to remain dark.  Security lights in most cases only need to illuminate footpaths and ground floor areas – generally avoid lights shining on upper storey hanging tiles, cladding and roof areas.

Use lighting only when needed.  Footpaths can be illuminated at very low levels until motion sensors detect movement, when higher intensity lighting is used.  This has been used along the Thames footpath at Richmond with carefully installed LEDs which illuminate the footpath but not the adjacent water.  Intelligent motion sensors can distinguish between cyclists, vehicles and pedestrians, using appropriate illumination for each.  This approach preserves dark wildlife corridors and can save up to 80% of running costs.

In summary, lighting engineering is entering a stage where there are both more choices of illumination, with increased control and lower running costs.  This can be used to benefit us all, in terms of cost and security, but with a little thought can also be harnessed to preserve and enhance dark environment for nocturnal wildlife, with no disadvantages. Jill Tardivel, Ecology@Tardivel Ltd