Exhibition Road has long been one of London’s most-visited streets. Running from South Kensington in the south to Hyde Park in the north, and home to the capital’s major museums and academic establishments, Exhibition Road was once an inefficient space. Flooded with traffic it simply couldn’t cope with, alongside pavements teeming with more than 11 million visitors a year, by 2003 the sheer popularity of the street had taken its toll.

The road was clogged with congestion and was unwelcoming for pedestrians – it needed a full redesign, and following a design competition held by the Royal Borough of Kensington and Chelsea, and won by architects Dixon and Jones, it was decided the solution was to be found in the concept of shared space. The approach, which minimises differentiation between vehicle traffic and pedestrians, is the brainchild of Dutch traffic engineer Hans Monderman, who designed the first shared space in 1968 in the Netherlands. 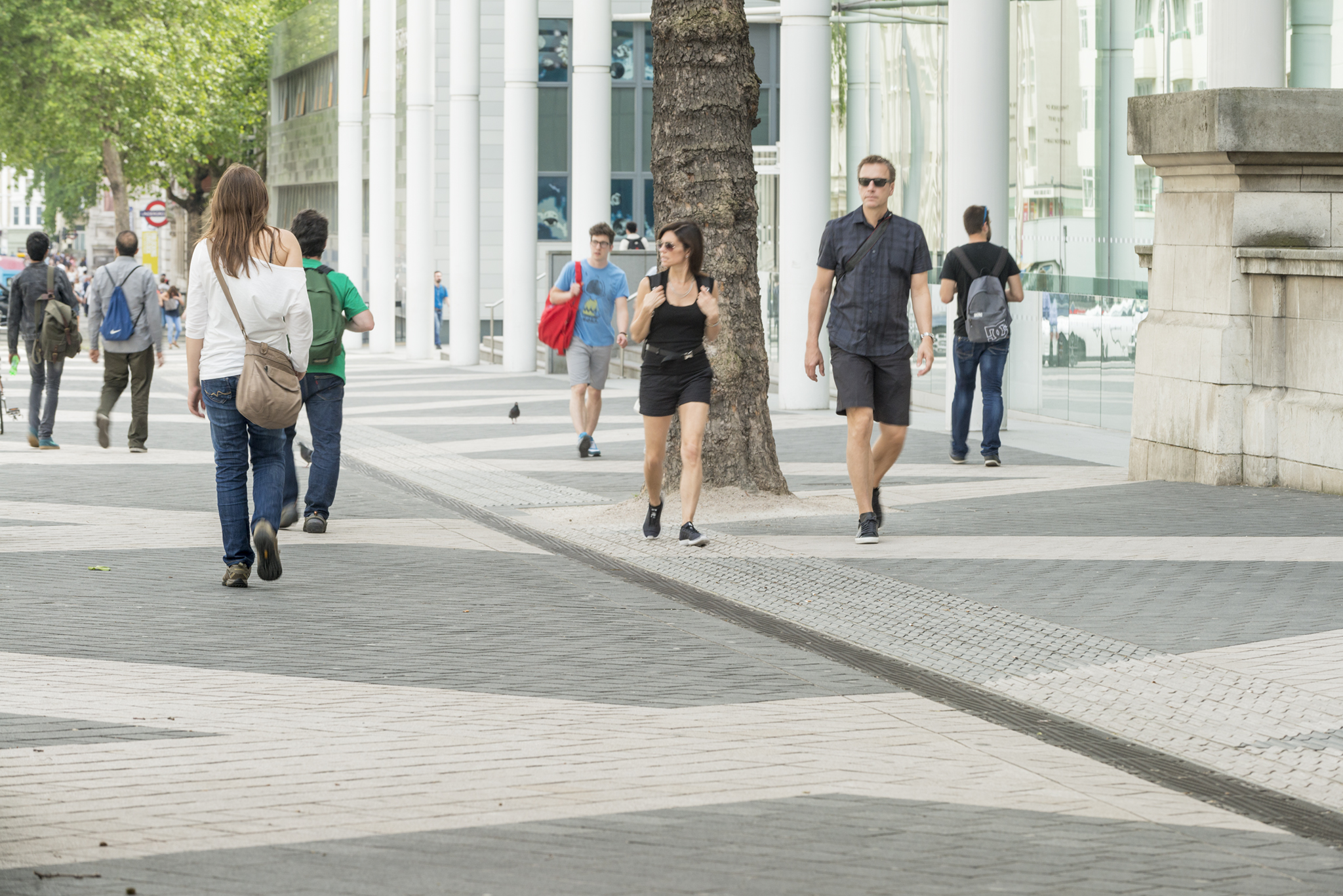 Kent played host to the UK’s first major scheme in 2008, when Ashford’s ring road was given a complete overhaul. The area noticed a substantial drop in collisions involving injuries after its completion.

On the world-famous Exhibition Road, by removing street features such as kerbs, pavements and other obstructions and imposing a 20mph speed limit, motorists were encouraged to be more cautious and engage with pedestrians to create an all-round safer and calmer environment that allowed crowds to flow through more freely.

In 2011, work was completed on the new-look street – a RIBA award-winning £28million re-development, during which we worked alongside architects Dixon Jones to supply the full solution package to shared space issues.

For the vastly improved streetscape, we provided Yorkstone paving and Granite setts banded in black and pink, which give the street its striking pattern and helped visitors orientate the area. Our water management team worked with Balfour Beatty to supply the street’s drainage solutions - two continuous linear drainage channels. We also provided bespoke and tapering 20m steel lighting masts that were striking in design, helped with security and complemented a co-ordinated range of street furniture, such as benches, bins and lighting, from the Marshalls GEO product range. The contemporary range of GEO street furniture in stainless steel reflects the best of urban design: simplicity, sustainable and robust materials in a low profile form.

To make roads safer, it’s the norm to install signage, additional traffic lights or focus on road markings – although Monderman’s ideas challenge this and actually do the opposite. With a shared space, thinking hasn’t simply moved away from the car, it instead is exploring street safety and placing emphasis on civilised streets that work for all. Exhibition Road is no longer a rat run and is now a clutter-free environment in which pedestrians and vehicles comfortably co-exist.

Of course, the main benefit on such a project is the considerable improvement in spatial quality – a minimalist move away from the ugliness of previous traffic-calming measures, such as speed humps or central islands. The road is now much more than a means of getting somewhere else.

Careful consideration should be given to any potential shared space projects. The idea relies on pedestrians, motorists and cyclists observing their environment, making eye contact, and coming to an informed decision about who has right of way. This means blind and partially sighted people are at a disadvantage, with no kerbs to use as a key navigation prompt. Shared space must recognise that not all users will be able to detect and recognise danger and risks. 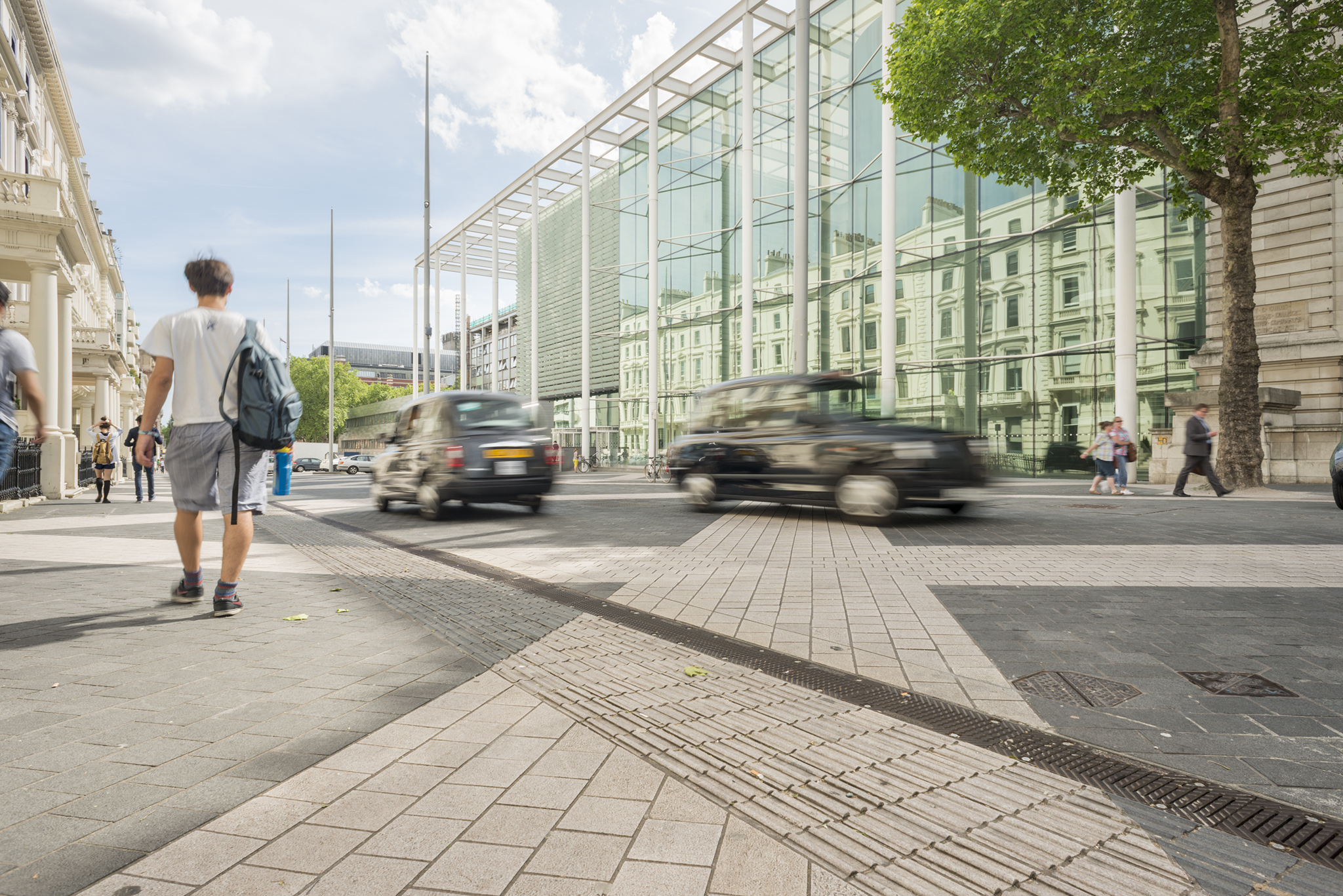 With the proposals regarding Exhibition Road, several regulatory bodies made sure they had their say. While corduroy tactile paving was installed for the visually impaired, the charity Guide Dogs took the Royal Borough of Kensington and Chelsea to court. As a result, there are now grooves within the pavement to mark where kerbs would have been, and there’s still debate about whether or not a controlled crossing should be installed.

Residents’ parking was another of the locals’ concerns, and this concern was overcome by the dotting of permit parking throughout the western area of the road. The area is also used for cycle parking and disabled ‘blue badge’ parking bays.

The shared space concept relies on people having the time to make well-informed decisions, so it could be argued as a risk to create such a space in a city’s busiest thoroughfare, for example. But Exhibition Road’s main ideologies can of course be applied to more modest areas.

We’ve recently added a tactile and live learning experience to our portfolio of CPD courses, which takes delegates on a free three-hour tour of Exhibition Road and explores the product choice and landscape decisions behind the award-winning project.

Escorted by a project consultant and an engineer, you will be given the chance to see how the shared space concept was handled, from design to installation, and be part of discussions about any improvements that could be made. The course looks at the future of shared space and how it could look, while helping inform any decisions delegates might have to make on any forthcoming large-scale projects in which a move to create shared space may have been proposed.

The bespoke element of the course means that delegates can ask our experts detailed questions in relation to their own profession. With more towns and cities throughout Britain considering shared space schemes, Exhibition Road remains a constant source of inspiration. 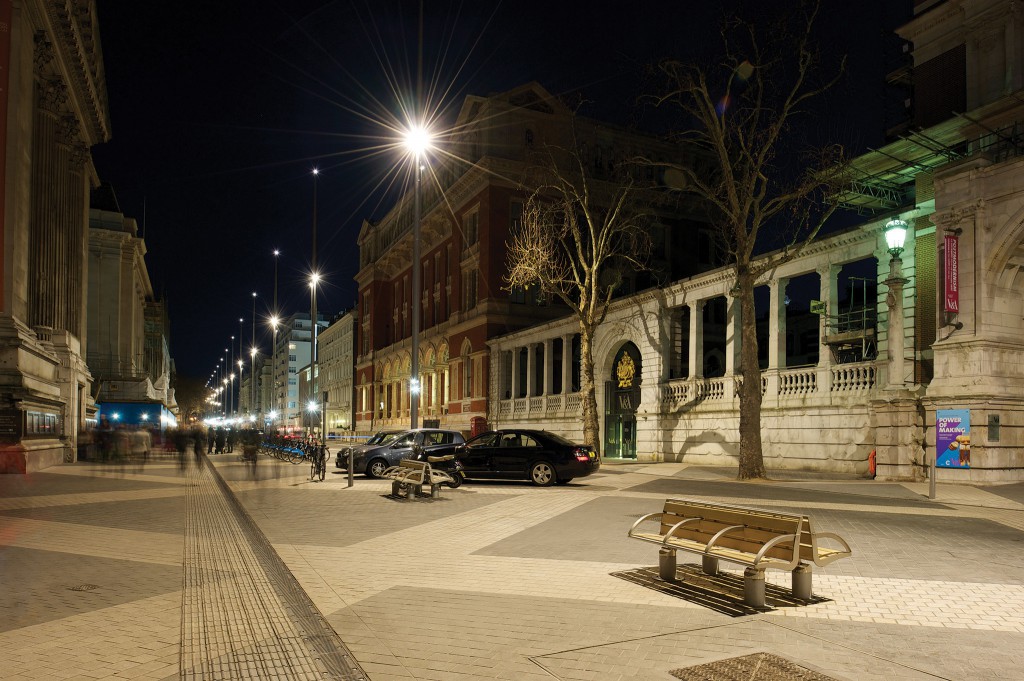 The Yorkstone granite setts and bespoke lighting give the street its unique visual identity.