Specifying Cor-ten for External Architectural Use 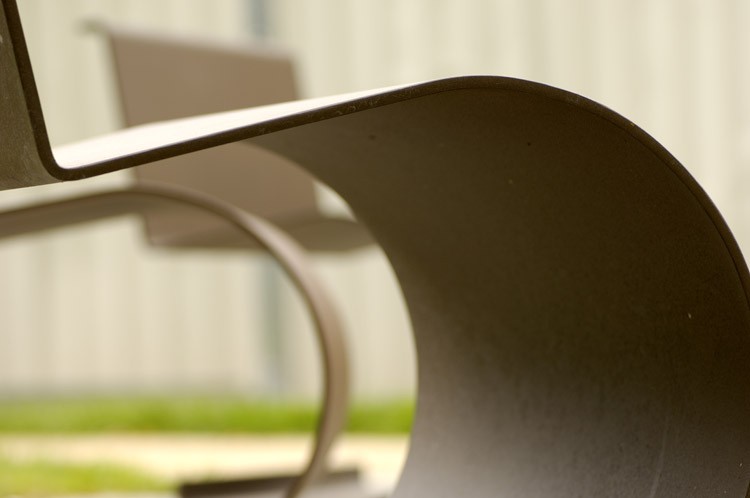 The material best-known under the trademark Cor-ten (sometimes as “Corten”) and is a group of weathering steel alloys developed to form a stable rust-like appearance. It was initially developed in the US for structural use in an unpainted condition.

It is famously used in Antony Gormley's The Angel of the North  but is most widely used in the UK for containers and bridge structures as it does not require protective coatings and costly maintenance. It is now being specified by architects for decorative use in the urban realm due to its attractive natural, matt, rust like look.

If normal low alloy steel is exposed to moisture and air then rust forms on the surface, this rust is non-coherent and falls away allowing the layers below to rust until eventual failure occurs. With Cor-ten steel the surface oxidises in the normal way but due to its metallurgical formulation it forms a coherent patina that adheres to the surface and reduces further corrosion.

The patina begins its formation with a reddish brown hue and slowly darkens. In normal weather conditions the patina will take 18 to 36 months to stabilise.

During this patina formation process, any run-off water may contain soluble iron salts which can cause discolouration of adjacent materials especially if they are slightly porous.

The layers develop and regenerate continuously when subjected to weathering influences. The rate of formation and protective effect of the covering layer depend largely upon the corrosive nature of the atmosphere and the likelihood and type of aggressive agents in the air should be taken into account. Due to the constant regeneration of the surface layer, when incorporating Corten in its unprotected condition, designers must also take account of the anticipated loss of thickness due to corrosion. As far as necessary, compensation must be made for this by increasing the thickness of the original material.

Uneven patina formation can be caused by surface contamination, handling marks and welding during fabrication.

Cor-ten is not advised for public realm application in coastal and harsh-weather environments or for areas which will remain permanently damp. The build up of the patina relies on the surface being regularly dried and so careful design must be employed allowing good ventilation and uniform exposure to the weather. Areas in contact with the ground, such as a lighting column root, must be protected with a barrier such as a glass flake paint.

If Cor-ten is specified for a planter then the inner surface will be continually exposed to damp soil. This will not generally cause any structural issues and the run-off water will pass through the soil or bedding material in the planter. However, care should be taken to provide for adequate drainage from planters and to ensure that this water cannot flow over easily stained surfaces.

This is shown in the image below, accentuated somewhat by the still-wet pavement. 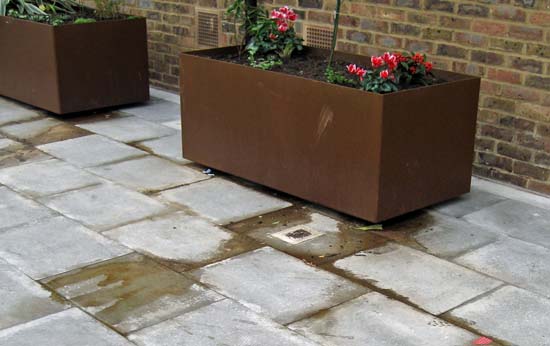 It should be noted that run-off water from planters can also be contaminated with salts and iron from the soil which can also cause staining of other adjacent materials such as concrete.

Cor-ten has also been used for public seating. During the patina formation process, staining to clothing could occur if the seat is not completely dry. Paint finishes are available which closely mimic the surface of Cor-ten and these may be more suitable for metal likely to be in close contact with clothing.

The protective layer should offer sufficient protection against atmospheric corrosion in most urban conditions but, where particularly aggressive air pollution exists, surface protection is recommended. When installed in a maritime location, in regular contact with water or permanently in a damp environment (for instance light columns installed below ground level), a secondary coating is essential.

This stabilises the rust and seals the surface, however it does change the appearance of the surface from a flat non reflective finish to that similar to burnished antique leather.