Rising to the low-carbon challenge - one brick at a time

The UK housebuilding industry faces a challenging conundrum. The puzzle it has to solve is to somehow build 300,000 new houses every year by 2025, whilst simultaneously aiming for zero carbon emissions by 2050.

As housebuilders work hard to report carbon performance to stakeholders, Carbon Disclosure Project figures show that many housebuilders’ carbon footprints are actually growing. While they design homes for low energy consumption and use sustainable materials, they're missing an opportunity for a big carbon win – by reconsidering the very bricks that they use.

What is a brick?
It's a strange question, we know. But a brick doesn't have to be made from clay and then fired.

The Cambridge Dictionary defines a brick as: "… a rectangular block of hard material used for building walls and houses". What the dictionary doesn't define is the major difference between traditionally fired clay bricks and concrete bricks. And that difference lies in their carbon footprint.

Concrete's major advantage is that it doesn't require firing. Instead, it’s cured by the heat from the exothermic chemical reaction of its ingredients. That's a huge CO2 saving over clay bricks, which have to be dried, then fired in kilns at temperatures up to 1,100 ̊C – an extremely energy-intensive process.

Leading the way on sustainability
We appreciate that all construction products have some impact on the environment, whether that's in the extraction of raw materials, manufacturing, packaging, transportation, site wastage or at the end of their lifecycle through disposal or recycling.

Marshalls is recognised as an industry leader on sustainability – and a key reason for that is our commitment to significantly minimising the carbon impact of our products. And we make those figures public too.

In an 18-month pilot with the Carbon Trust, Marshalls became the first business in the industry to put Carbon Reduction Labels across an entire range of 503 hard landscaping products. That makes us one of the world leaders in carbon labelling.

Indeed, we recognise that reducing CO2 is now a critical goal for UK housebuilders – and that they are searching for lower-carbon solutions that meet their stringent requirements. That's why we added concrete bricks to our range of products.

So what is the difference between the carbon impact of concrete bricks and fired clay bricks?

Comparing concrete and clay
The average house uses 8,000 bricks1 and there were 195,000 new houses built in 20192. That means there were roughly 1.4bn bricks used in UK housebuilding last year, 91% of which were made from clay and fired in gas kilns3.

With a cement content as low as 8% the use of cement replacements and natural curing with no need for firing, little additional energy is required to manufacture concrete bricks. Typically, fewer than 5Kw hours are consumed for every tonne of bricks produced4.

Using data from Environmental Product Declarations (EPDs) from the The Brick Development Association, The Concrete Block Association and Interpave, we can compare the carbon impact of concrete bricks with their fired clay equivalents.

What we see is that the embodied CO2 of concrete bricks is 28% less (quarry to site)5/6/7/8.
Above and beyond that, concrete bricks are net absorbers of CO2 due to their continuous carbonation over their lifetime.

And at the end of that lifetime, they’re 100% recyclable. So when you look across the total lifetime, concrete’s carbon footprint is 49% that of traditional bricks5/6/7/8.

To put that in context, if UK housebuilders switched to concrete bricks for all the houses built in just one year, the lifetime CO2 savings would be equivalent to taking 300,000 cars off the road9 or reducing transatlantic flights by almost half a million10.

Conclusion
As the world battles with an impending climate emergency, businesses have a responsibility to mitigate the damage they do – even if that means changing traditional behaviour.

Just because we've always done something in a certain way shouldn't stop us looking for better choices. After all, that's the basis for innovation.

We believe that UK housebuilders have the power to transform the carbon impact of the industry AND meet both their government building targets. But they cannot do that using conventional fired clay bricks.

Ultimately, all we ask is that you rethink your opinion on concrete bricks. Our low-carbon future might just depend on it.

Take a look at our concrete facing brick range today. 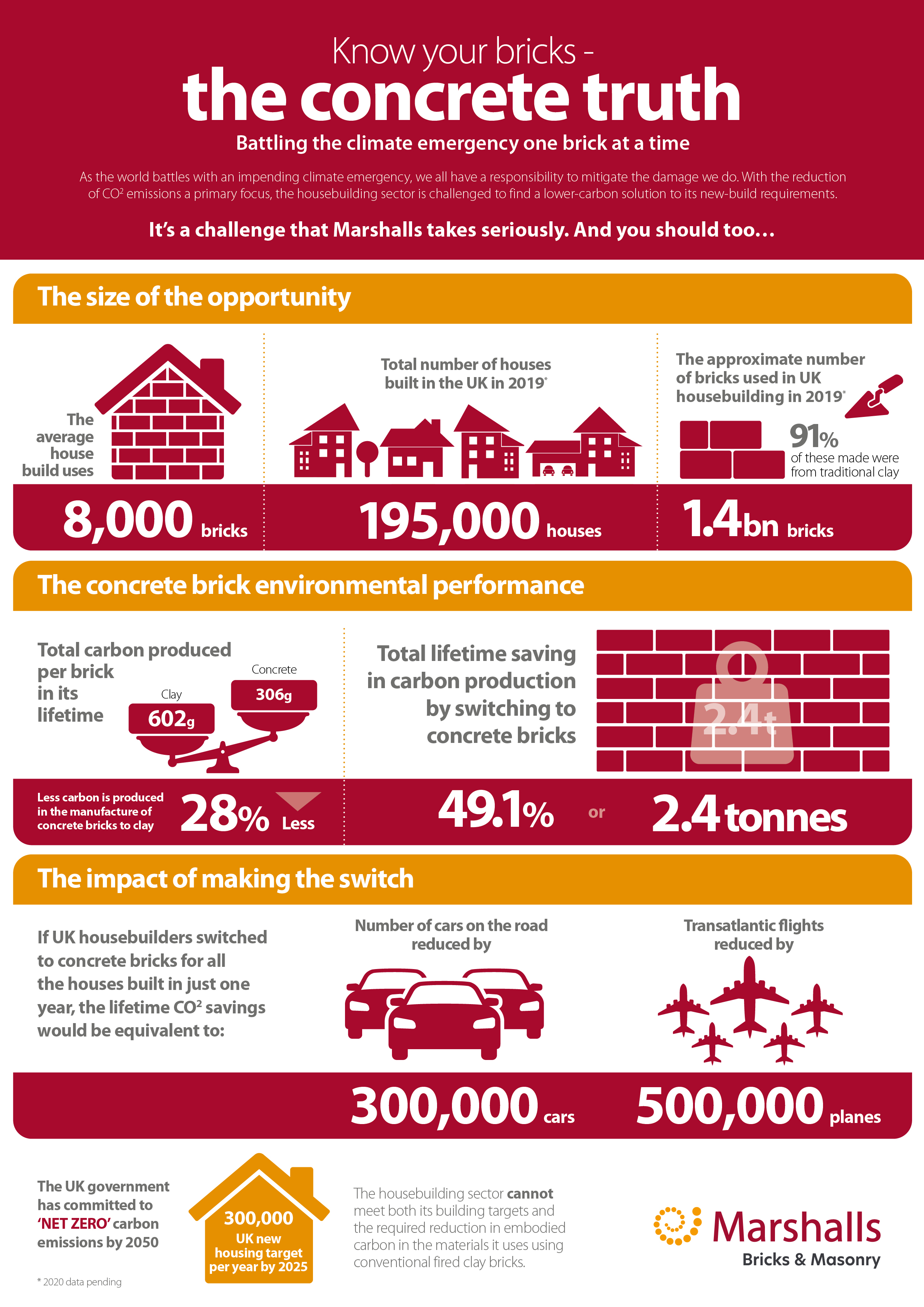 9. Our calculation based on: European Parliament: "CO2 emissions from cars: facts and figures 18-04-2019 - Transport CO2 emissions in the EU (Range of life-cycle CO2 emissions for different vehicle and fuel types)"

10: Our calculation based on: The Guardian: "Carbon calculator: find out how much CO2 your flight will emit" - July 2019