Five of the World’s Most Innovative Sustainable Buildings

Sustainability in building has long been a priority for developers. Regulations now call for stringent checks and balances in the use of materials for building, as well as in operational procedures once a new structure is occupied and fully functional. Much of the time, a building’s lofty aspirations for sustainability and recognition by Building Research Establishment Environmental Assessment Methodology (BREEAM) are cut down by budget and time constraints. However, there are still some outstanding examples of what a building can become when its designers pay attention to the ways it can be environmentally friendly and socially responsible throughout its entire lifespan. Here we look at five of the best examples of sustainable development – two of which are right here in the UK. 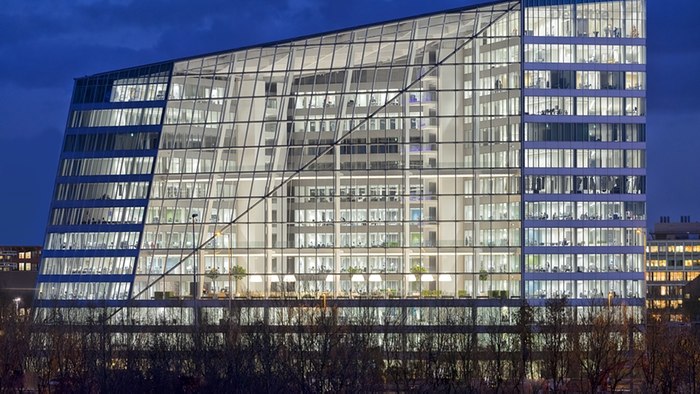 In late 2014, The Edge was certified by BREEAM as the world’s most sustainable building thanks to its multitude of energy-efficient features. The corporate headquarters for Deloitte spans over 40,000 square metres and is only the second building of its immense size to receive recognition from BREEAM. From its inception, The Edge was positioned in such a way that it makes full use of the sun. With more than 4,000 square metres of solar panelling installed on the rooftops of the nearby university, The Edge generates enough energy from the sun not only to power the whole complex, but to keep it at comfortable temperatures using a system that heats and cools a source of water storage. The Edge also has a system that uses sensors to transmit real-time data on each room’s light levels, maintenance, temperature and humidity, which can be controlled by the workers to ensure their comfort.

Powered by more than 1,500 square metres of solar photovoltaic panels on its own roof, the Crystal is the base of operations for the UK arm of Siemens. Heating this impressive building is done by pumping water deep under the ground to be heated at a thermal source, then piped back up and around the building. The Crystal Building Energy Management System is used to determine where best to place the energy the building creates. It takes humidity, temperature and rainfall readings from an outdoor weather station, and feeds the information onto 3,500 data points within the building, which will adjust their output accordingly to provide comfortable conditions for occupants and save energy where it does not need to be deployed. The building is also used for exhibits to demonstrate the potential for city planning using these self-same promoters of energy efficiency. 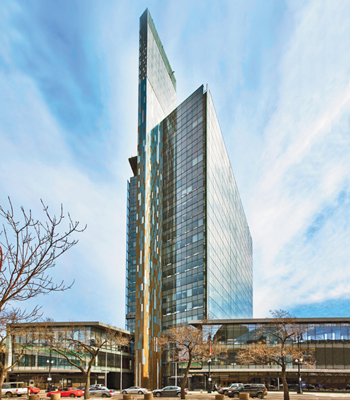 Dubbed ‘the most important building in Canada’ by the Toronto Star, this 21-story office block is a feat of sustainable building, combining a more conventional structure with some impressive features for its size. MHP uses an estimated 85 kWh/m2[1] – less than a quarter of the energy of a typical North American skyscraper – by utilising a solar chimney to ventilate the building with constant fresh air, rather than relying on powering up office heaters or air conditioning to suit the rather varying weather. With a large glass front providing more exposure to natural light, sensors in the building are able to adjust the internal lighting to compensate at different times of day. As the headquarters of the province’s power company, Manitoba Hydro, the building in itself is a statement of the progressive views towards energy saving and sustainability that Canada as a whole is trying to promote through various eco-friendly schemes. 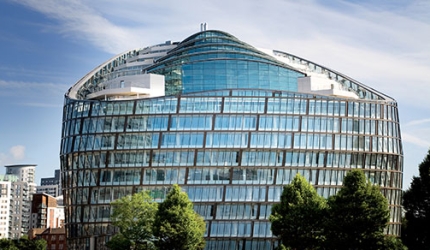 One Angel Square, Manchester. Image courtesy of Designbuild-Network[/caption] Home of the Co-operative Group in the UK, its Manchester base was designed with the same sense of community in mind as the developers sought sustainability in the build. Like the examples of the Crystal and MHP above, the building’s 3,000-plus occupants are kept comfortable by a central ventilation system that runs top to bottom, processing air in the basement’s power plant before distributing it evenly to each of the building’s ‘control zones’. One Angel Square’s control over the ‘double-skin’ façade also ensures that the air coming in can be either let out in the summer to keep things cool, or kept in to insulate the building during the colder months. With a focus on low energy usage of its computers and lighting, the Co-op’s base is an impressive monument to modern thinking. 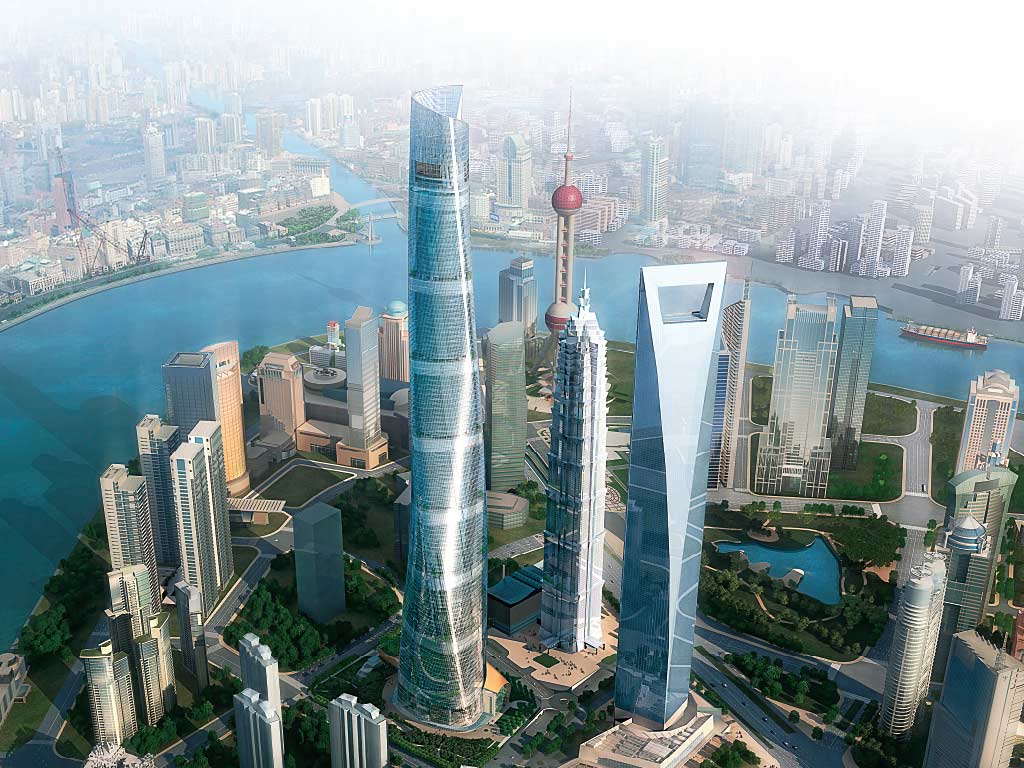 Shanghai Tower, China. Image courtesy of Du.Gensler[/caption] In China, where space is at a premium and energy consumption set to accelerate, the Shanghai Tower is an attempt to reclaim some of those resources. Completed in the summer of 2015, the building’s 121 storeys[2] are split into nine different residential and commercial ‘zones’, each of which has its own energy requirements. Much like One Angel Square, one of Shanghai Tower’s most promising features is the double-skin, which can regulate the air within by trapping or releasing it as required. Near the top of the tower, more than 2,000 feet in the air, wind turbines power the building’s exterior lighting, contributing to a saving of one-fifth the energy usage compared to a similar-sized structure[3]. The building is expected to reduce its carbon footprint by an estimated 34,000 tonnes per year[4], too, in hopes of meeting the gold standard of the Leadership in Energy and Environmental Design initiative. While the initial costs of constructing sustainable buildings with an energy-efficient outlook may appear to outweigh any potential for recouping expenses, the benefits are there to be reaped – not to mention the significant savings on energy they can stand to make in the long run. It’s vital that, from the very first stage of planning, sustainability measures can be factored into budgeting, materials and construction costs. We’re always excited about the potential that our materials have for ensuring that a project has as many of these features as possible, which is why we continue to spread the good word of sustainable building for both the environment and our clients’ wallets. You can read about the ways we aim to reduce our own carbon footprint, including how much CO2 is emitted in the process of creating each of our products. You can even use our carbon calculator to add up the amount of CO2 your new installations would create, and the equivalent in trees that would need to be planted to offset the weight of the carbon footprint. Efficiency in design is a big part of our outlook, which is why we’ve honed our skills to ensure that supplying a job is done with the optimum materials, avoiding wastage and thus unnecessary production of CO2.